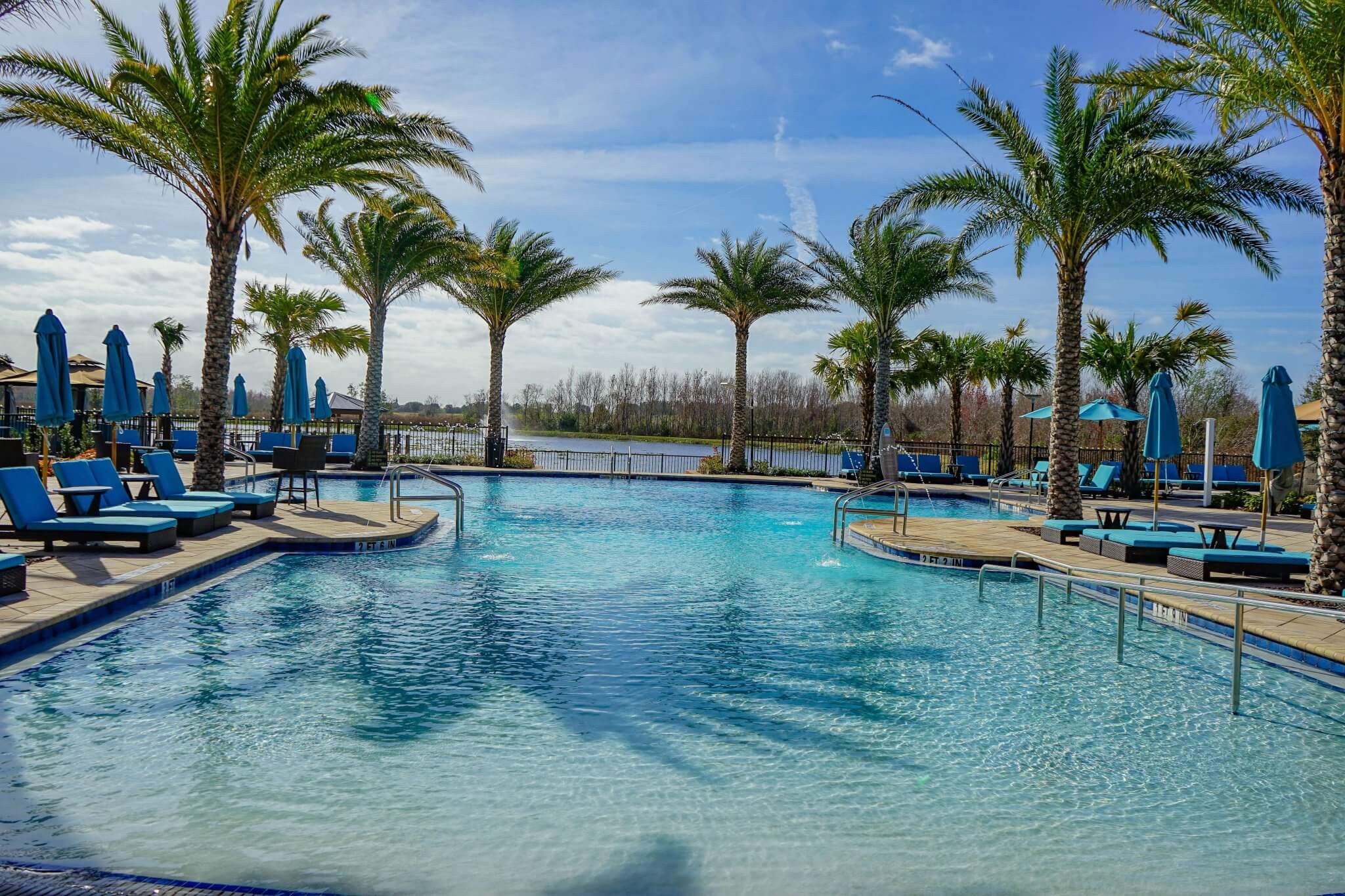 When Frontier Airlines released their new route from Buffalo to Orlando in December 2017, we made sure we were ready to alert you all as soon as seats went on sale as well as nabbed a couple for ourselves. It was $80 CAD including taxes for a roundtrip. Was it all worth driving an hour and a half to Buffalo to catch the flight? Check out our review here.

We decided to spend a full week in Orlando alone. Although the driving distance to great cities like Sarasota, West Palm Beach and Tampa is only a few hours. We spent only 1 day at Disney World and we wanted to see what else Orlando had to offer besides the two major theme parks (Disney World & Universal Studios). Our week was jammed packed and instead of writing this blog journal style, I rather talk about some of our more unique and new experiences, the great dinner shows we attended and thirdly, some of the attractions that we wouldn’t normally go to but surprised us in how much fun we had!

I’ve heard about the Blue Man Group for as long as I can remember, but I had never seen their show or even know what it was about. We went in knowing nothing but their familiar faces. It was very entertaining and definitely something I had never seen before! They were 3 awkward and funny blue men performing sketches of comedy, music, and tricks. The show involved a lot of unique uses of color, sound and audience participation. 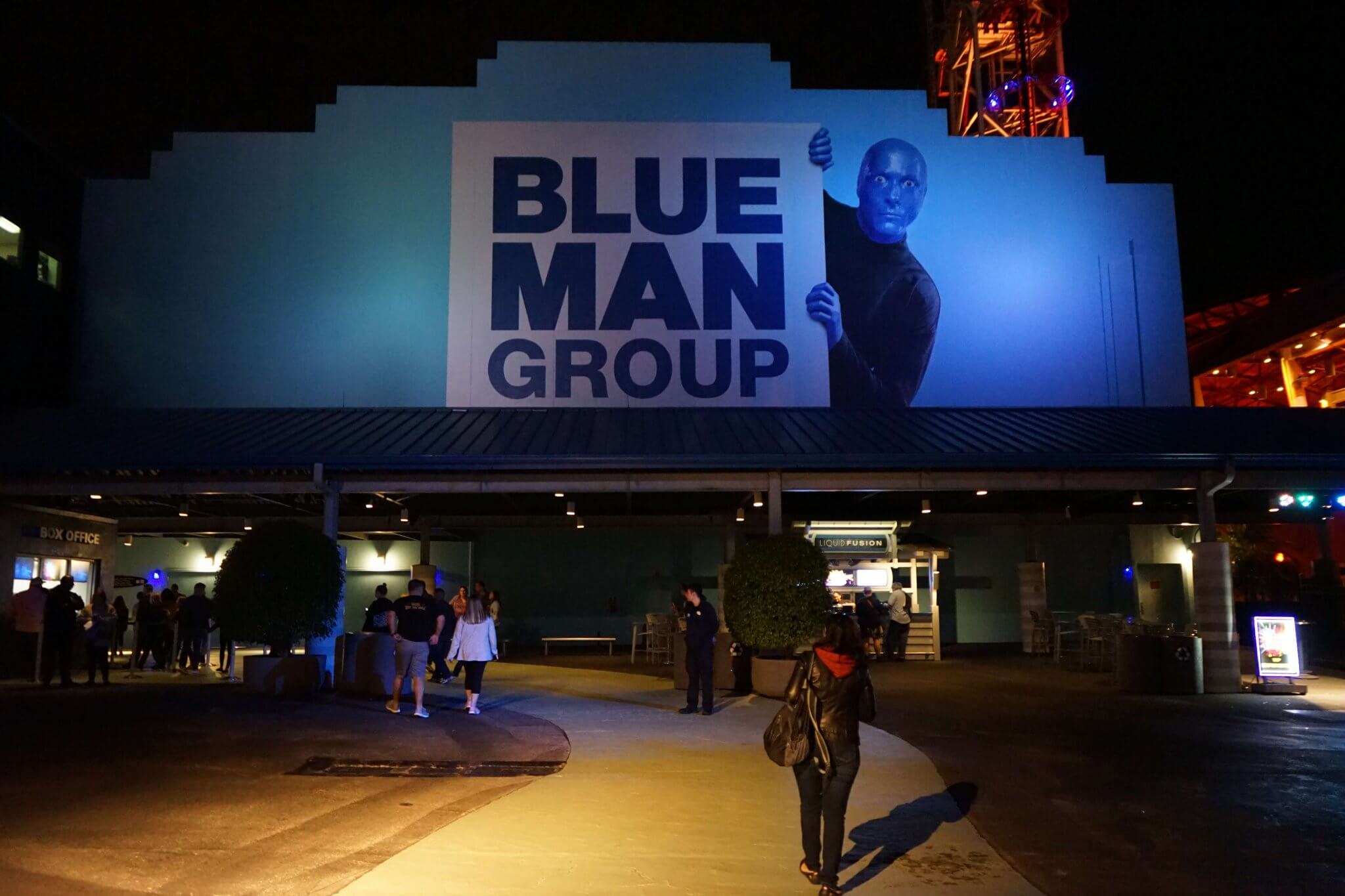 My favorite part was when these massive colorful balls drop from the ceiling and everyone was pushing them unto each other turning the whole room into a massive party! The location of the Blue Man Group show is inside Universal City Walk which is always exciting. You can grab dinner and drinks at City Walk and take pictures at the entrance of Universal Studios.

Forever Florida is approximately an hour away from downtown Orlando. Their mission is “to conserve and preserve natural, wild Florida”. If you love nature, then I recommend you to visit. They have horseback tours and a buggy adventure where you experience wildlife in their natural habitat. They also have a 7 Zip Adventure, which is what we signed up for. Above the wild, we did 7 fast and scenic zip lines. The best part was that it was fully guided. There were two guides, Paul & Garrett, that hooked us up each time which made it much less scary. They were also super great at calm those who were afraid of heights and also very entertaining. 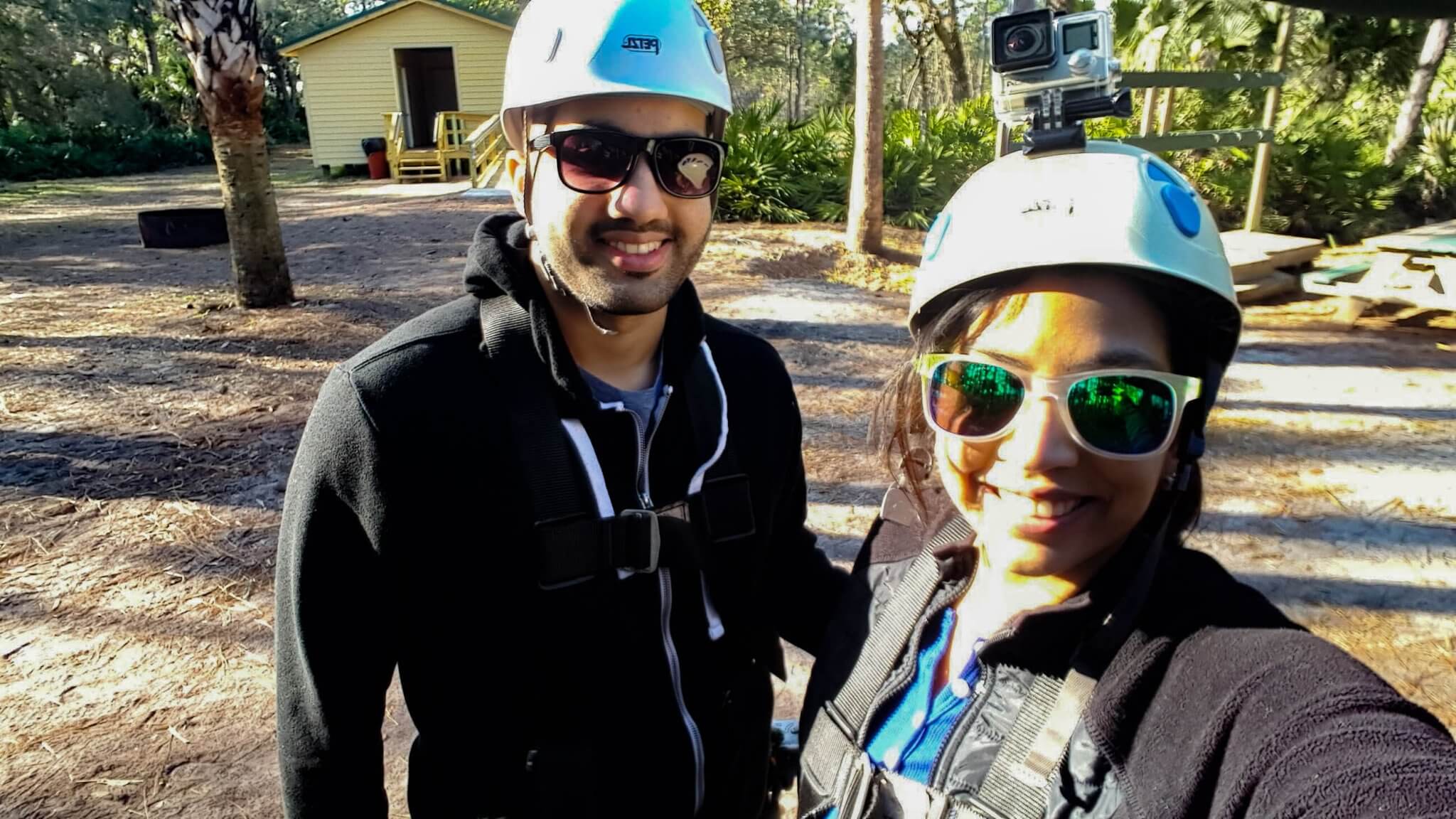 The Kennedy Space Centre was probably my favorite experience that week. Even if you’re not a big space fan, it is still extremely fascinating. It is also an hour outside of Orlando towards the coast. There is so much to do and see that you can easily spend a full day there. The best part was once you get inside the visitor center, you can go on a 2-hour bus tour which takes you closer to NASA’s famous VAB building, their current launch pad, as well as SpaceX’s buildings. We were able to see the Falcon Heavy prepping at their launch pad. 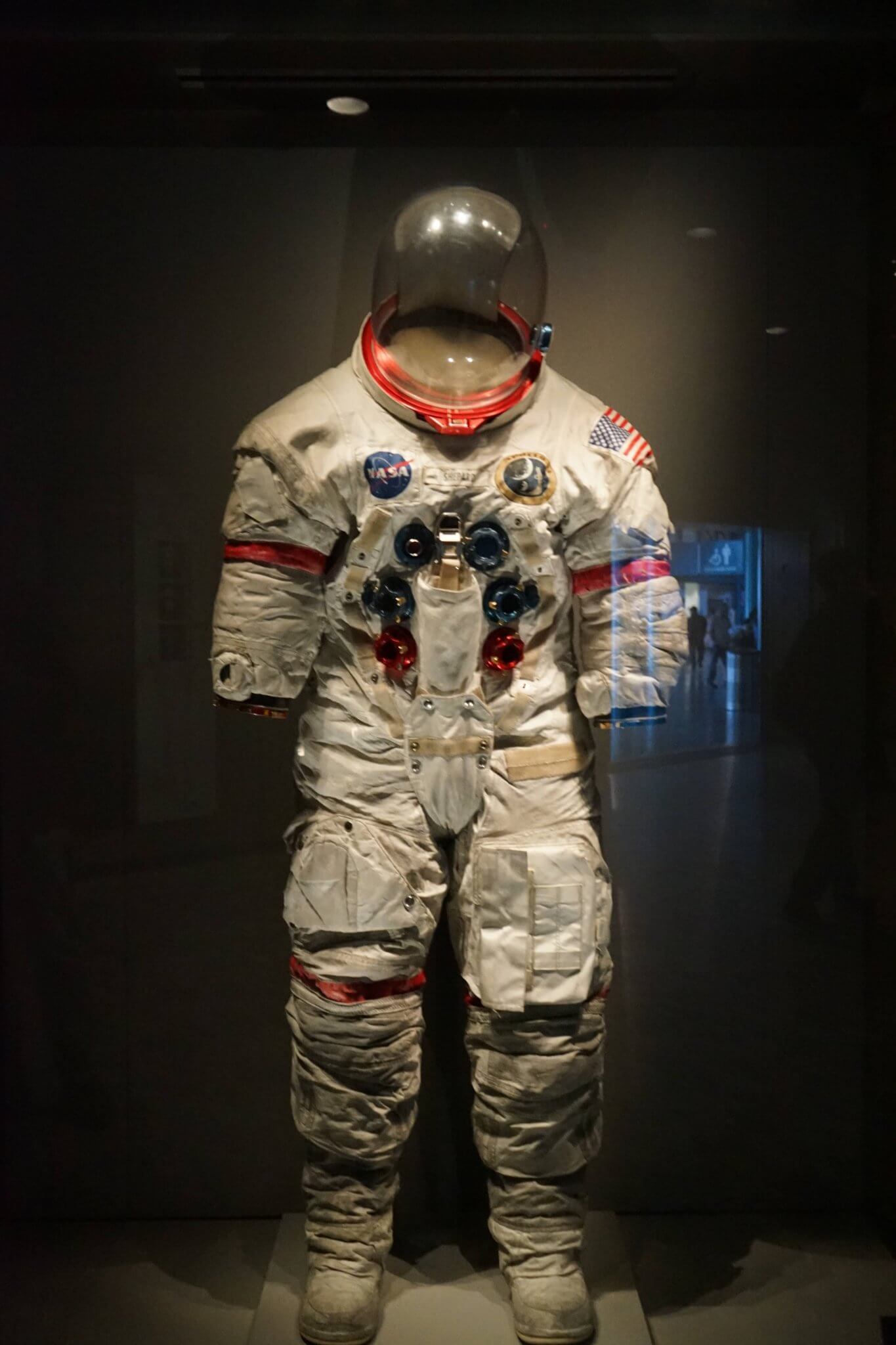 The exhibition of the Saturn V (the one that got us to the moon), accessed only by the bus tour, was breathtaking! We are definitely planning to go back, especially on a date that coincides with a launch date. We highly recommend you don’t skip going to the Kennedy Space Centre. 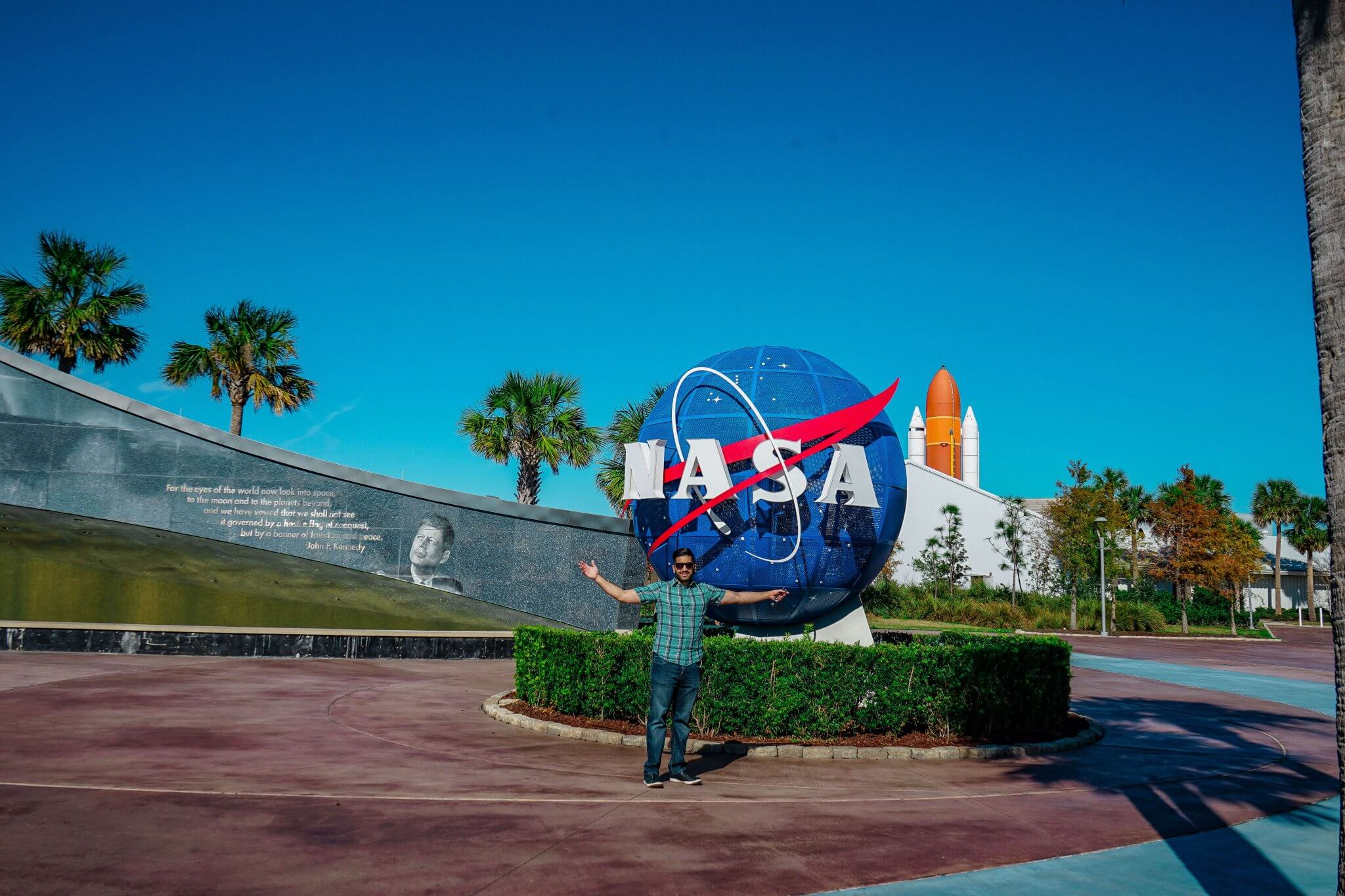 Our jaws dropped to the floor the minute we walked in. It definitely lived up to its name. There were hundreds of alligators everywhere! We attended two live shows they did with the creatures. One was a Gator Wrestling Show where they would climb on top of the animals and do a few dangerous stunts in close proximity. 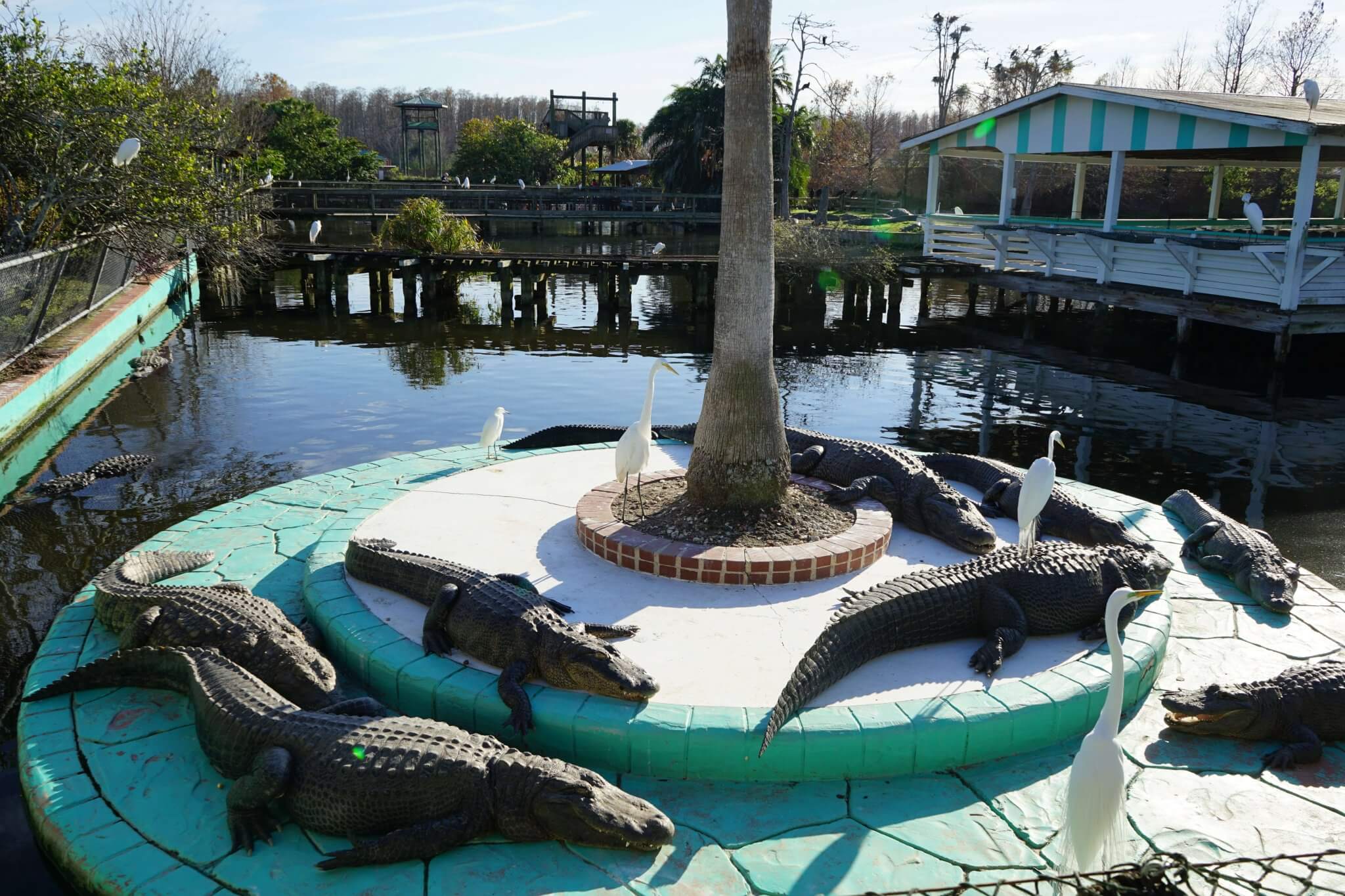 The other was the Gator Jumparoo Show where they performed a funny skit involving the gators to jump up from the water to catch some meat. There were other awesome activities available such as a zipline that goes across the swamp filled with gators and exhibitions featuring albino gators and panthers. If you’re a fan of these creatures, I think it would be safe to assume you need to visit the self-acclaimed “alligator capital of the world”! 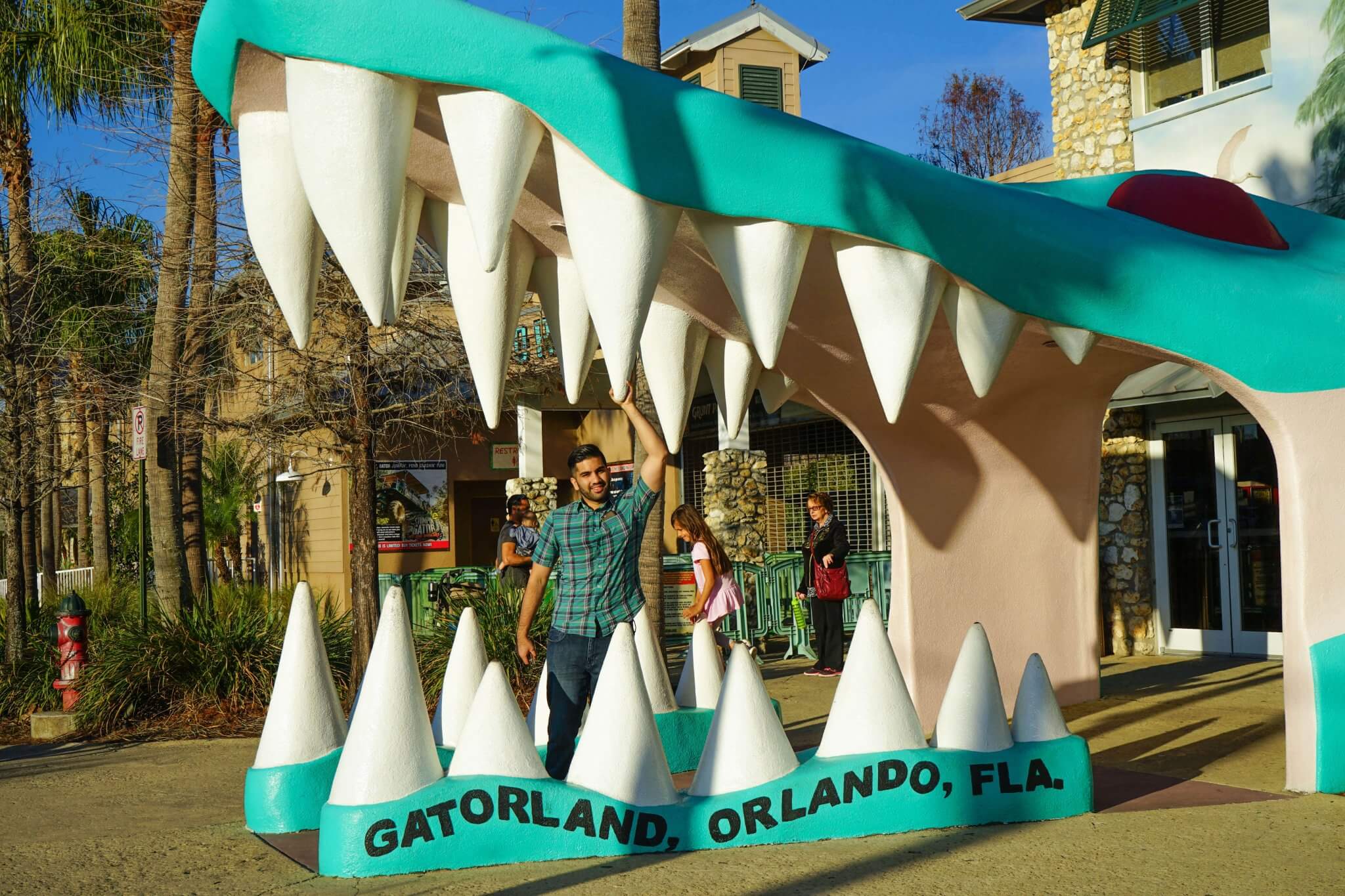 Visiting Revolution Off Road for some Mucky Duck was something neither of us had ever experienced. We got to drive an 8 wheeled amphibious vehicle called the “Argo” in and around a wet and muddy trail. The activity was guided by Chris who was great at explaining how to drive through the water and mud. We followed him on the trail while he looked back every few minutes and took some great photos of us! Taking steady candid pictures takes some serious skills while driving shakingly through the uneven muddy trail! We both got to take turns driving as we stopped halfway. It was a crazy experience which we highly recommend!

Going on an airboat exploring the swamps is a must! They give you headphones to cancel out the very loud noises coming from the fan. During the guided, one-hour boat tour at Wild Florida, we saw some intriguing looking birds, cattle, as well as wild gators. The bald cypress trees were stunning as we were fully immersed in swamp nature. After the boat tour, you can experience their own gator park. Although not as big as Gatorland, they had some great exhibitions featuring zorses and lemurs! 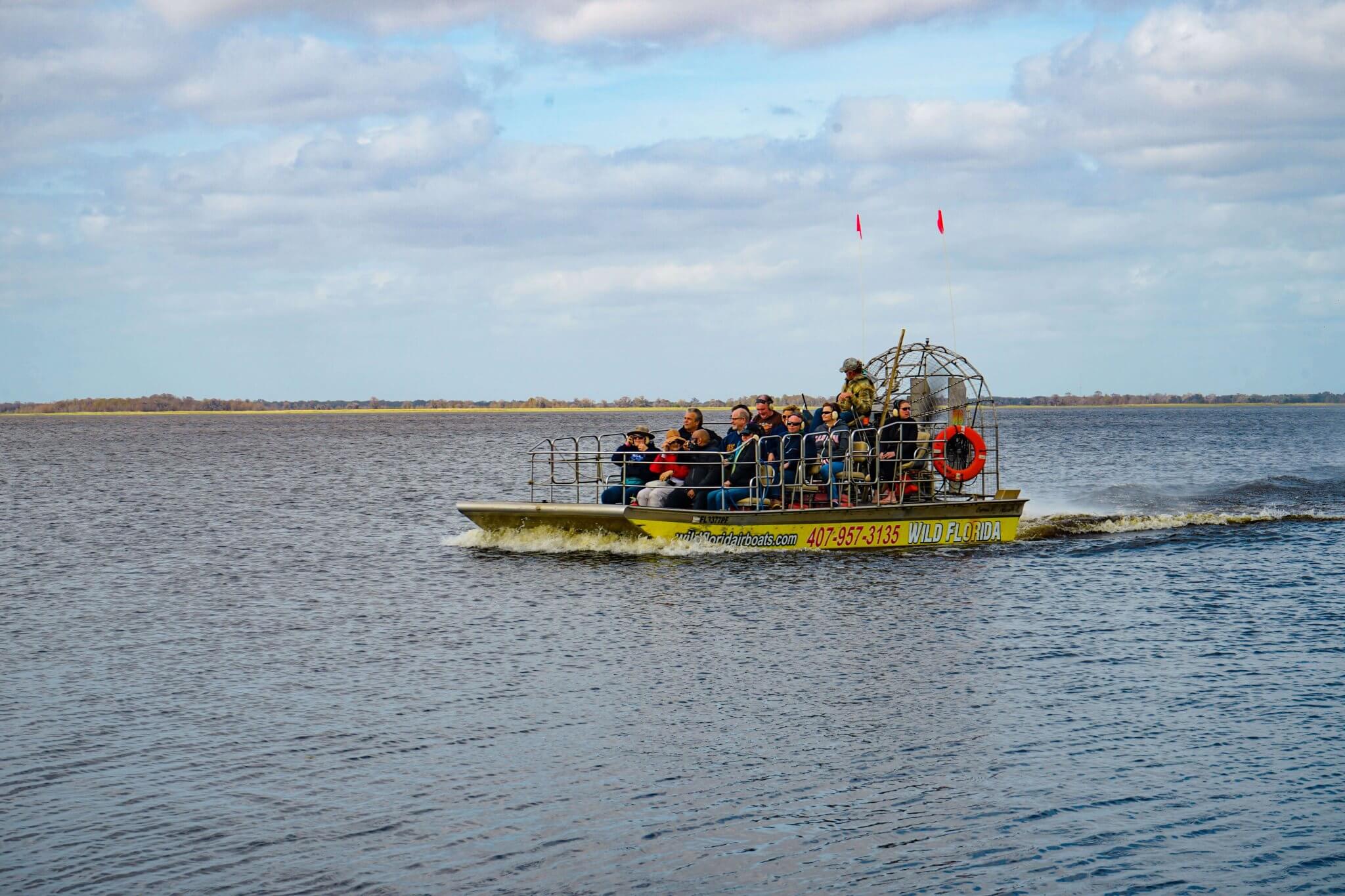 Sleuths location is right on International Drive, next to the Coca-Cola Eye and many other activities. We chose your meal beforehand when reserving our tickets. It’s a Murder Mystery show that involves some audience participation. The audience is part of the show as soon as they walk in, it was very clever. A nice feature was that it was unlimited beer, wine or soda with your 3-course meal. Everyone is seated at round tables with others so it’s a great way to meet other people. We met some individuals who were actually actors themselves who were auditioning to work at Sleuth’s! The building is a little outdated but the show itself featured some great actors and a good storyline. We recommend to folks who enjoy watching theatre. 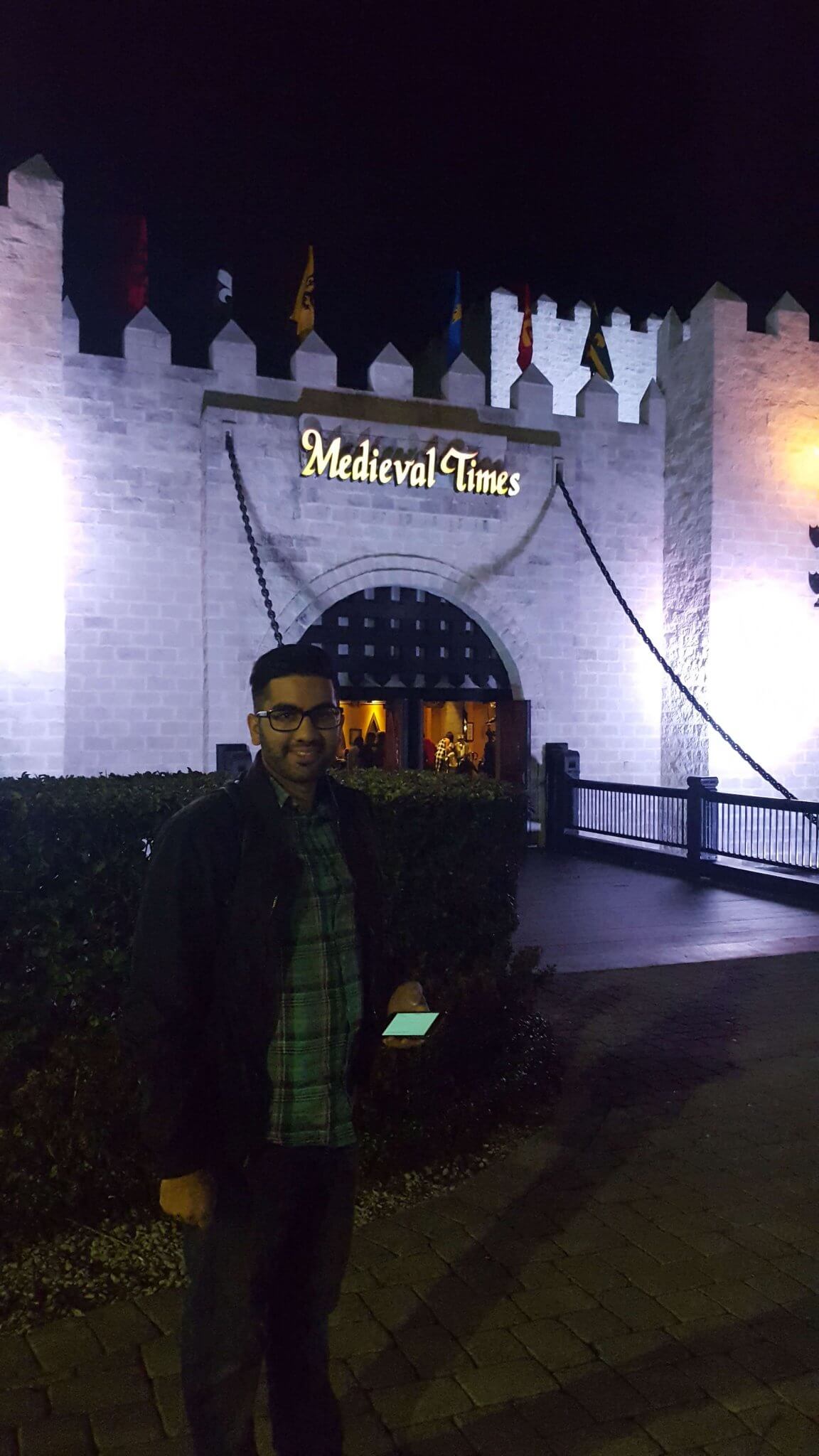 Having never attended the Medieval Times at home in Toronto, it was quite an experience! From the moment we walked into the building with fire lit torches at the entrance and a moat, we felt we were immediately traveled back in time. They gave everyone paper crowns to wear with different colors according to the seating. Each color has a knight representing their section so the show was quite competitive. We ate similar to the time period, with no utensils but with our hands. It was a fantastic performance with the use of many horses.

Mango’s got a great location on International Drive next to many other attractions. The musical show is meant for adults but we saw a few kids. They reenacted songs from Selena, Michael Jackson and other top 40 songs. The venue is much larger than the location in Miami South Beach. They had an elaborate large two-floor stage. It’s a great show to celebrate special occasions; we saw a surprise engagement go down on stage! Their food portions are huge and they really got the best drinks in Orlando. 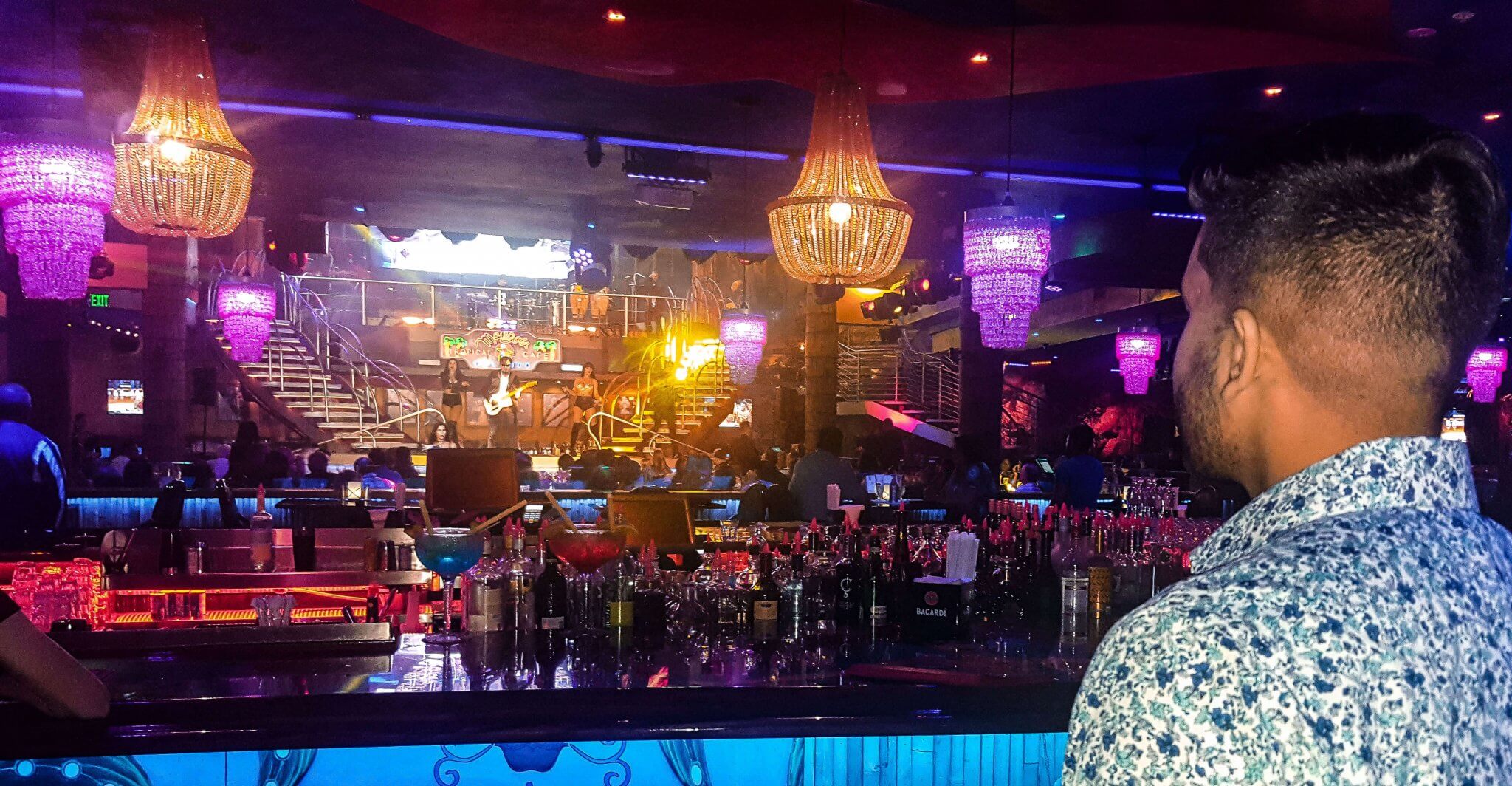 Outta Control Dinner Show is inside the crazy Wonderworks building. Everyone is seated next to each other so similar to Sleuth’s, it’s also a great way to meet new people. They served unlimited salad, pizza, wine, and beer; yes, unlimited. The pizza was actually very good. There are also options for food for a price. It was a comedic magic show that was quite hilarious. Lots of audience participation was needed. After the show, you can explore the rest of Wonderworks that have odd and interesting interactive exhibitions. We tried out a virtual reality roller coaster where they strap you into a pod, and spin you around while you watch a screen mimicking a rollercoaster. It’s a great venue to visit for both adults and kids!

Been There, Still Good

Ripley’s Believe It Or Not

Ripley’s was pretty fun. I didn’t realize how many fascinating exhibitions they have. We recommend going to Ripley’s when they first open in the morning or an hour before they close, since it’s very empty. It’s filled with interactive games and I’m sure it can get easily frustrating if it had been busy. It’s a great educational activity for both adults and kids. 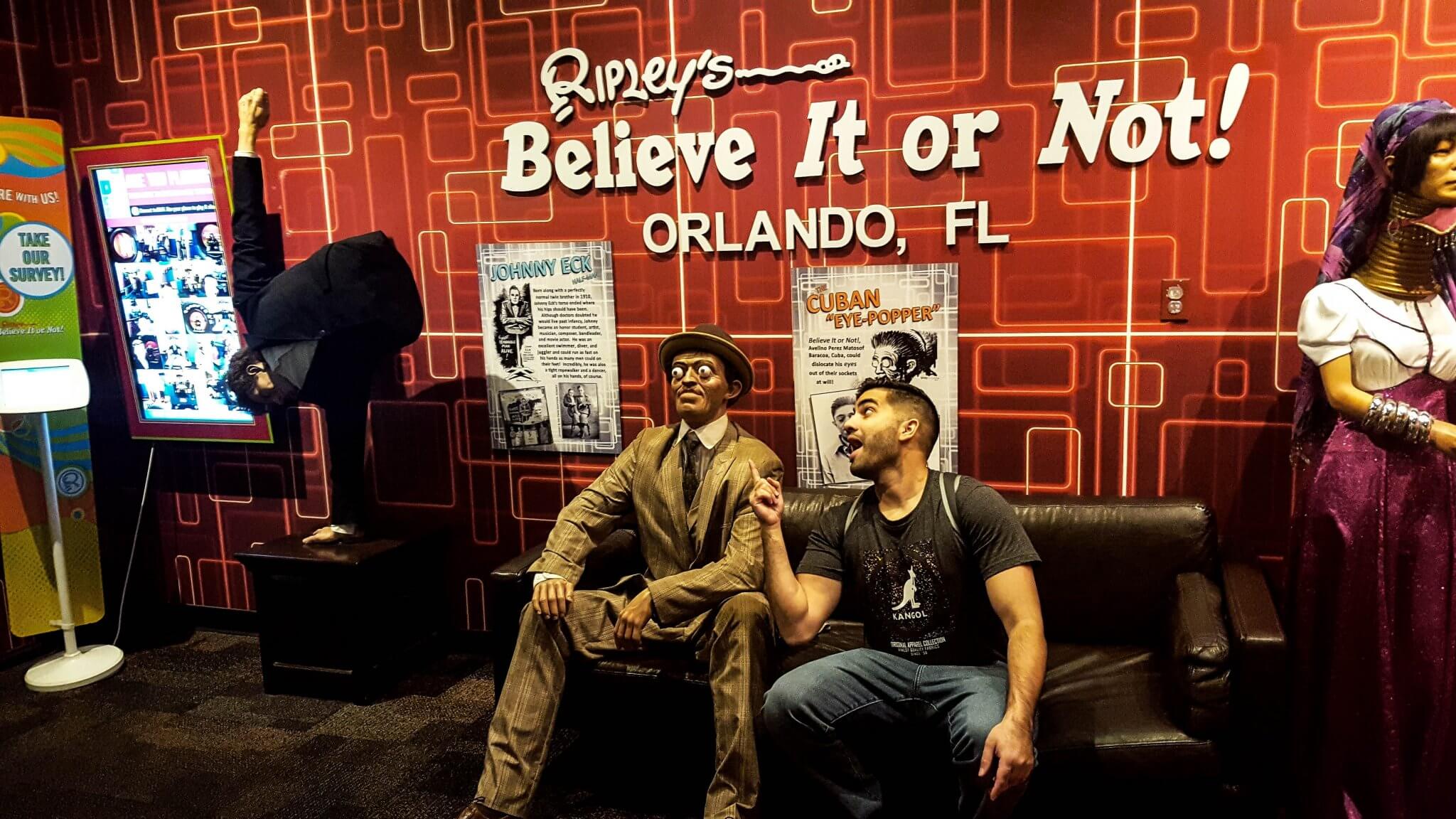 If you need a relaxing break, checking out the Orlando Coca-Cola Eye is the best thing you can do. It’s a huge ferris wheel with the ride being 20-30 mins long. We went right in a there was no lineup and got a pod all to ourselves. There’s a big bench inside so we just sat, relaxed and enjoyed the amazing views of Orlando! You can’t really see Disney or Universal from up top but I’m sure it would be stunning to take the ride at sunset. 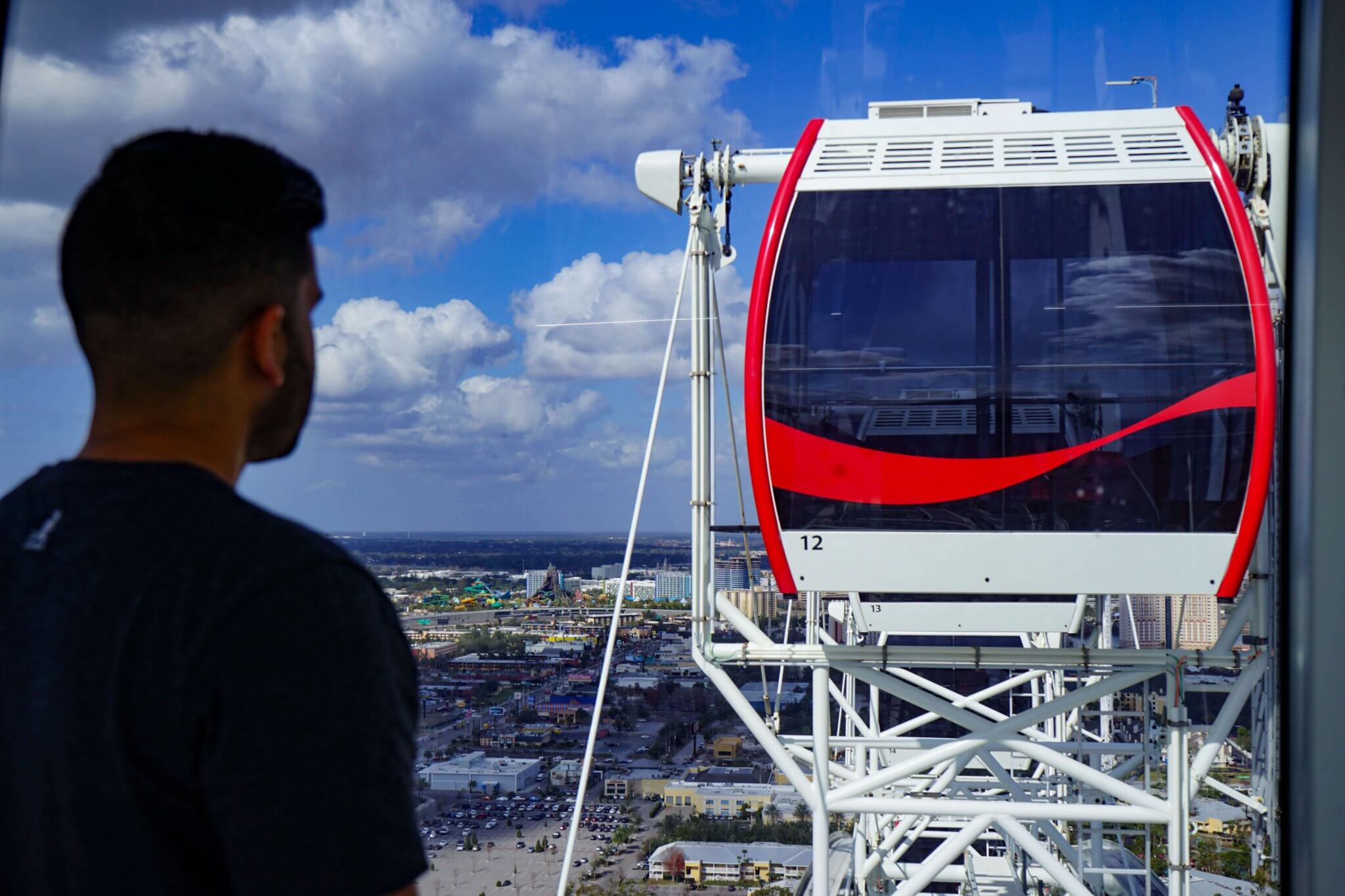 One of the most coolest mini golf course we’ve ever been to! There are two paths, a challenging one, and a scenic one. We took the scenic path. Some of the holes took us through caves and pirate ships. We experienced some of the most inventive hole designs ever. It was a lot of fun, so don’t skip this activity!

One of my favorite things to do in Orlando, more than most other cities in the US, is going outlet shopping. They have some of the best outlet malls ever. We went to the Orlando Vineland Premium Outlets. Out of all the attractions we went to that week, including Disney World, the busiest place was this mall! There were some great sales going on but we had to choose carefully since we came on Frontier Airlines with only a personal item bag. The PUMA store was very busy and decided to take a look. Rishi got the Apex sneakers which was told to us by the store manager, Juilio, that once you put them on, you won’t be able to take them off. No joke, to this day, Rishi still comments on how comfortable they are!

All in all, our week-long trip to Orlando was incredible. Going in January was a smart decision as the crowds were low and it was still warm enough to get a tan. Try not to get too caught up in the many theme parks and give its nature and wildlife a chance and be open to meet with locals; there some of the friendliest folks! Frontier Airlines will have deals often so take advantage when they do!

NOTE: All of these opinions are 100% our own and reflect of our personal experiences. We collaborated with Visit Orlando on this trip.