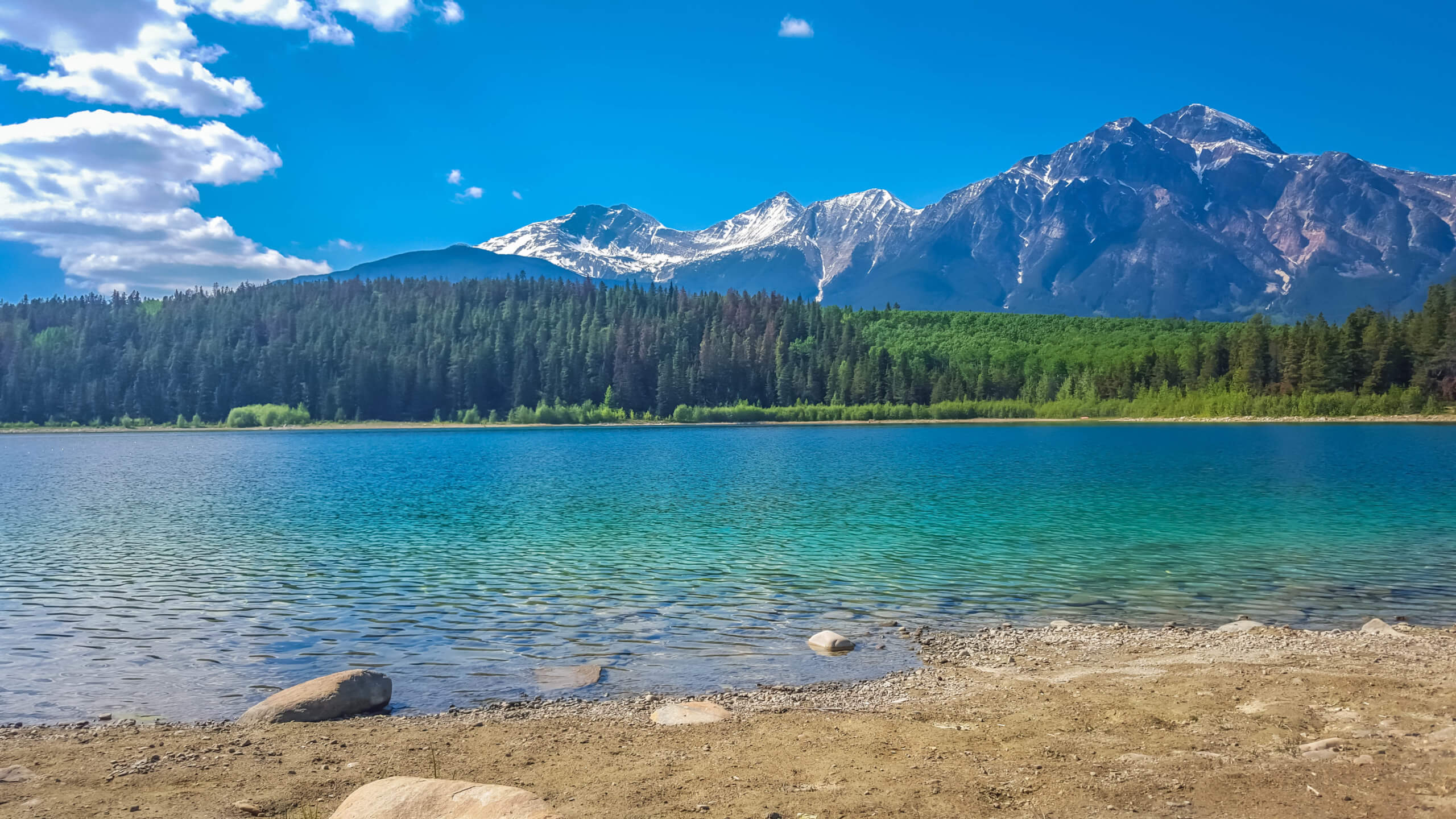 Our Adventure in the Great Canadian Rockies

Last May, Rishi and I scored one of the cheapest flights to Western Canada – Toronto to Kelowna for only $278 CAD round trip. This happened when New Leaf Travel released their new budget prices to the public, and a few days later, Westjet followed suit, releasing similar if not cheaper prices within Canada.

We booked the flight from Toronto to Kelowna, with a stopover in Calgary. The plane ride was an experience itself, with a pretty amazing view of downtown. The whole ride from Calgary to Kelowna was breathtaking. Having never seen the Rockies before, the aerial view was an exciting preview of the sites we were about to see. Needless to say, I was glued to my window seat the whole time. 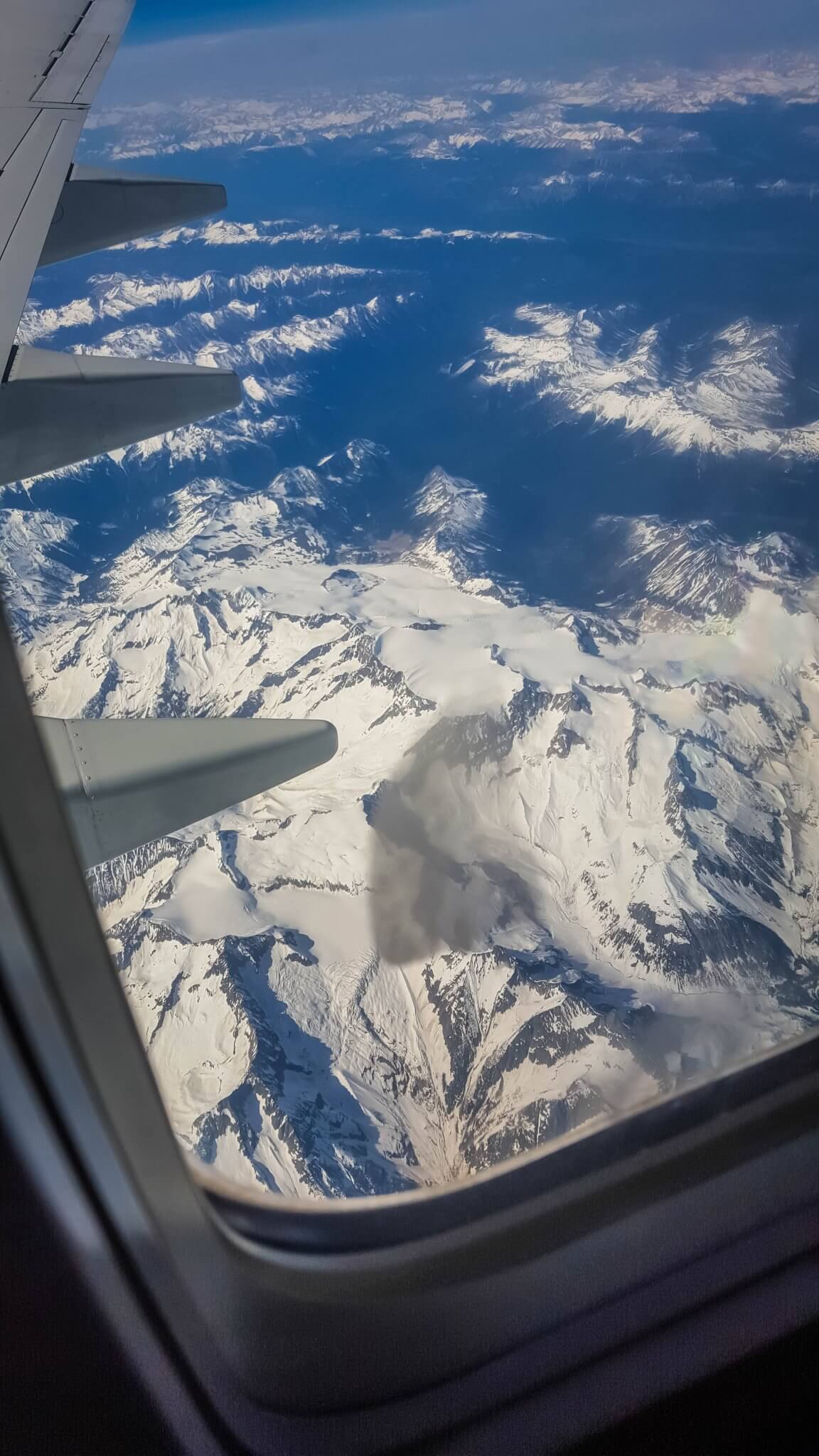 We landed at the tiny airport of Kelowna and rented a car for $170.66 for the full week. Our first stop was the Waterfront Park. Having left Toronto during a particularly cold May, we were thrilled to have arrived in Kelowna, where it was hot 29℃, and perfect weather for enjoying the beach.

Cactus Club was a great stop for a refreshment. They had the patio doors open right on the Marina, with beautiful views of the Okanagan Valley. I couldn’t believe I was in Western Canada, as we were feeling a tropical vibe. That night, we stayed at the Coast Capri Hotel which was more than comfortable.

The next day we headed off to the wineries. We went to Gray Monk, Arrowleaf, House of Rose, Quails’ Gate and the beautiful Mission Hill Estate. All of them had incredible scenic views of the Okanagan Valley. Despite it being a cloudy day, the nature around us was refreshing and beautiful. We had some lunch at the BNA Brewery and then went to Knox Mountain Park for some short hikes. I highly recommend driving all the way up to the top of Knox, as there are more beautiful views up there.

Having spent two days in Kelowna, we felt it was more than enough time to experience the region.

We started our drive to Lake Louise and Banff the next day. The drive was amazing. The best thing about renting a car is that you are fully on your own schedule and can check side stops as frequently or as quickly as you want. We checked out The Last Spike for some photo ops, and some stops in Revelstoke. Once we entered Yoho National Park, we checked out the Upper Spiral Viewpoint and the drove a bit on the Yoho Valley Rd. Unfortunately, because we were traveling in early May, most roads weren’t open yet. We missed out on Emerald Lake, Lake O’Hara and Takakkaw Falls.

We arrived at Lake Louise and it was unfrozen! I had been watching this webcam every day in hopes it would defrost. Then, when we landed on that that hot day in Kelowna, I had an inkling it might. Still, we were not expecting it to have defrosted so early, and it was such a great surprise. As it turns out, it was the earliest recorded date for Lake Louise to thaw – May 9th, 2016!

We went on our first hike of the trip; the Lake Agnes Trail. It took us 45 mins up and down. Steep switchbacks the whole way. When we got up to Lake Agnes, the Teahouse was closed. It was so different from Lake Louise. Lake Agnes was still frozen and it started to snow up there! It was quite an adventure. It was a moderately difficult hike with an incline the whole way up.

When we got back to the Fairmont Chateau, we bought beers that we felt were well deserved! Then, we were off to Banff to end the evening, staying at Bow View Lodge. We stayed at this hotel for 3 nights and I do not recommend it. It felt like a 2-star, old motel. Finding affordable lodging was difficult in Banff, even during the offseason. Staying in Canmore, which is 20 mins away from Banff can be an option, as there is slight cheaper accommodation there.

During our stay in Banff, we got food from Balkan Restaurant, Tooloulous, Coyote Southwestern Grill, Bear Street Tavern and the Banff Ave Brewing Co. All were surprisingly very good restaurants with delicious food and drinks. They didn’t feel touristy and overpriced like I was expecting them to be. I especially highly recommend Balkan for their Greek cuisine and Tooloulous for breakfast.

Brewster Travel Canada is the only company that sells the tickets in Banff and Jasper National Park. We don’t usually like buying city passes but since most attraction prices were so expensive, it made sense to save some money by buying the bundle. We purchased the Banff Ultimate Explorer for each of us. It included the Banff Gondola, Banff Cruise on Lake Minnewanka, the Glacier Skywalk, and the Glacier Adventure. Out of those four, my favorites were the Banff Gondola and especially the Glacier Adventure.

The Banff Gondola takes you up to Sulpher Mountain, and the ride up and down is private. The views that you get from the gondola are indescribable. There are really no words to describe the beauty of it, and no picture or video will do it justice. You just have to see it to believe it. Once you get up there, you can walk even higher. It’s 360° of breathtaking mountain scenery. It was something I had never seen before in my life. I truly fell in love with nature all over again.

The Glacier Adventure was quite a unique experience. It starts from the Columbia Icefields Discovery Center which is halfway between Banff and Jasper. A bus takes you across the highway. You then get off the bus and onto the Ice Explorer; a gigantic, expensive and amazing ice bus that goes on the surface of the Athabasca Glacier. You then can get off for 45 mins to walk around on a glacier, drinking fresh glacier water, and generally just be in a state of awe. It was an eye-opening experience when the guides started to talk about how the Glacier was receding rapidly due to global warming. It loses almost 5-10 meters a year, and will eventually be gone.

After we left Banff, we headed over to Calgary for a quick day trip. We ate at SALTLIK steakhouse, and the food was delicious. We walked down 7th Ave and up 8th to check out Olympic Plaza and the City Hall. We ended our evening at ENMAX Park where we took up amazing shots of the Calgary skyline and then headed back to Banff.

The next day we were off to the Columbia Icefields for a hike at Johnston Canyon. The first part of the hike is very easy and super fun as you walk alongside the river rapids and end with a beautiful waterfall. We made the decision to hike 6 more km to the inkpots. It was a difficult hike for us, as inexperienced hikers, but it was so worth it. After an hour of hiking in steep and muddy trails and we ended up in an opening surrounded by mountain scenery. Mount Ishbel was beautiful. It was so peaceful up there. The inkpots gave way to brilliant colors, bubbling away. There are a few benches there where you can sit and eat lunch and take it all in.

For two nights, we stayed at the Glacier View Inn which was right across from the incredible Athabasca Glacier. The only problem with staying there was there’s nothing around. For food, the only option is to eat at the overpriced hotel restaurant. We had to drive an hour and a half to Jasper back and forth which was a bit annoying. Also, it is right next to a glacier so it was -15℃ in the area, probably the coldest area in the region. I don’t regret it though because it had one incredible view from the hotel balcony.

When we arrived in Jasper on the first day, we had the most delicious sandwiches at Patricia Street Deli. For dinner, we treated ourselves at Syrahs of Jasper, where you can try Albert Elk and Boar as well as Bison. We didn’t spend a lot of time in downtown Jasper and drove up to see Maligne Lake and Medicine Lake. They each had their own, unique beauty, and definitely a must see!

As we were driving on Maligne Lake Rd, we saw a few cars stopped on a side of the road. We knew that may mean a wildlife spotting, so we paid attention and pulled over when needed. To our delight, we saw a black bear – a first for us! We just watched it and followed it with our car as it walked near the road trying to find something to eat. It was the Canadian version of a safari, it was a lot of fun!

We also checked out Patricia Lake and Pyramid Lake and Island. From Jasper, we drove back on the Columbia Icefields Parkway and back to Banff before we headed back to Kelowna to catch our flight home. On the road back we saw the incredible Athabasca Falls and Bow Summit (our favorite viewpoint) to see the famous Peyton Lake.

Lake Louise was on the way back, as we were leaving the Rockies on our last day, so we decided to check it out one more time as it was a nice sunny day. The color of the water was so crazy and best of all, it was the first day they opened up the boat rentals! The earliest in history! We got a canoe and rowed our way on the beautiful Lake Louise. It was such a great way to end the trip.

The energy of the mountains is something very special. You forget about all your problems because you’re in awe of the scenery all the time. I felt so incredibly happy on this trip, I could not stop smiling. I truly believe that this region possesses a unique positive energy that can have a strong influence on your mood and outlook. It’s particularly refreshing if you’re a big-city dweller.

If you are a Canadian and haven’t seen the Rockies, you need to make it your goal. We definitely have something extraordinary in our own country, and I am so proud of it. Happy 150th Birthday, Canada!

If you need help planning a trip to this area, I can give you a free quote for my consulting services. Email me at farah@nextdeparture.ca