It was your typical summer day on August 2nd, 2015; the sun was shining, the birds were chirping and Rishi was posting travel deals. At the time, Next Departure was in its infancy , however, that day while sitting at the ballpark in Toronto watching the Toronto Blue Jays play the Kansas City Royals (in which they won 5-2 in heated game that saw bench clearing brawl, I was receiving text messages from my at the time girlfriend Harmeet (now fiancée) regarding a flight from Toronto to Paris with a return flight from Madrid. I can truthfully say that we weren’t spontaneous travelers and it was vastly out of character to do so, (perhaps it was the beer and the emotions of the game) but we pounced on the deal and booked a flight for May 2016 unknowingly what the future holds. Fast track to this day and I look back to that Blue Jays game as a move of spontaneity that changed the way I think about booking trips thanks to Rishi and Next Departure.

As the months progressed, we started planning for the trip and excitement started to build. In anticipation of the trip, we spent hours and hours researching and building an itinerary for this memorable experience we’re about to encounter. As time went along, Harmeet was the one doing most of the planning but for good reason. I decided this was the trip I wanted to pop the question, but the question on remained, when and where? I thought about Paris, but felt it was a li le cliché. I then thought about getting down on one knee in Barcelona, but it just didn’t feel right. That’s when we booked Santorini. If you’ve never been to Santorini or any of the Greek islands, I highly recommend it. It is truly paradise on earth. Harmeet didn’t think I was very helpful with the planning process, but I knew she would understand as I was busy coordinating at off hours with representatives from Greece (Photographers, Staff etc.) about how I was going to propose. On May 31st, 2016, I finally proposed, and yes, she said Yes. From the Blue Jays game to waking up with a blue sea, it was made possible with the deal Rishi posted, so thank you Next Departure for our happily ever after moment. 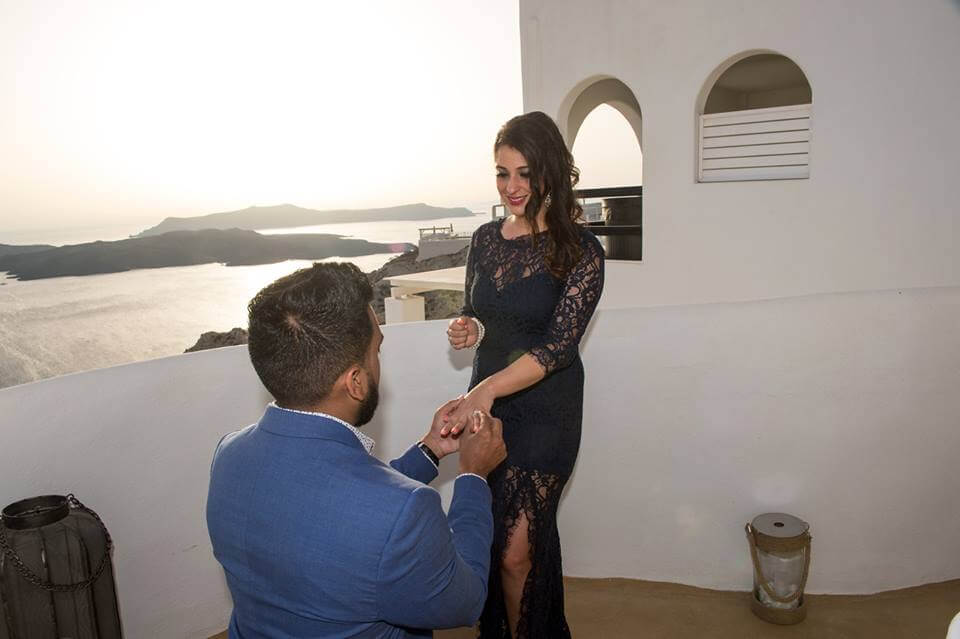 On April 14th, 2017, they had a beautiful wedding which we were so honored to be a part of.

If you have a special story with a travel deal you found using Next Departure, feel free to message me at farah@nextdeparture.ca