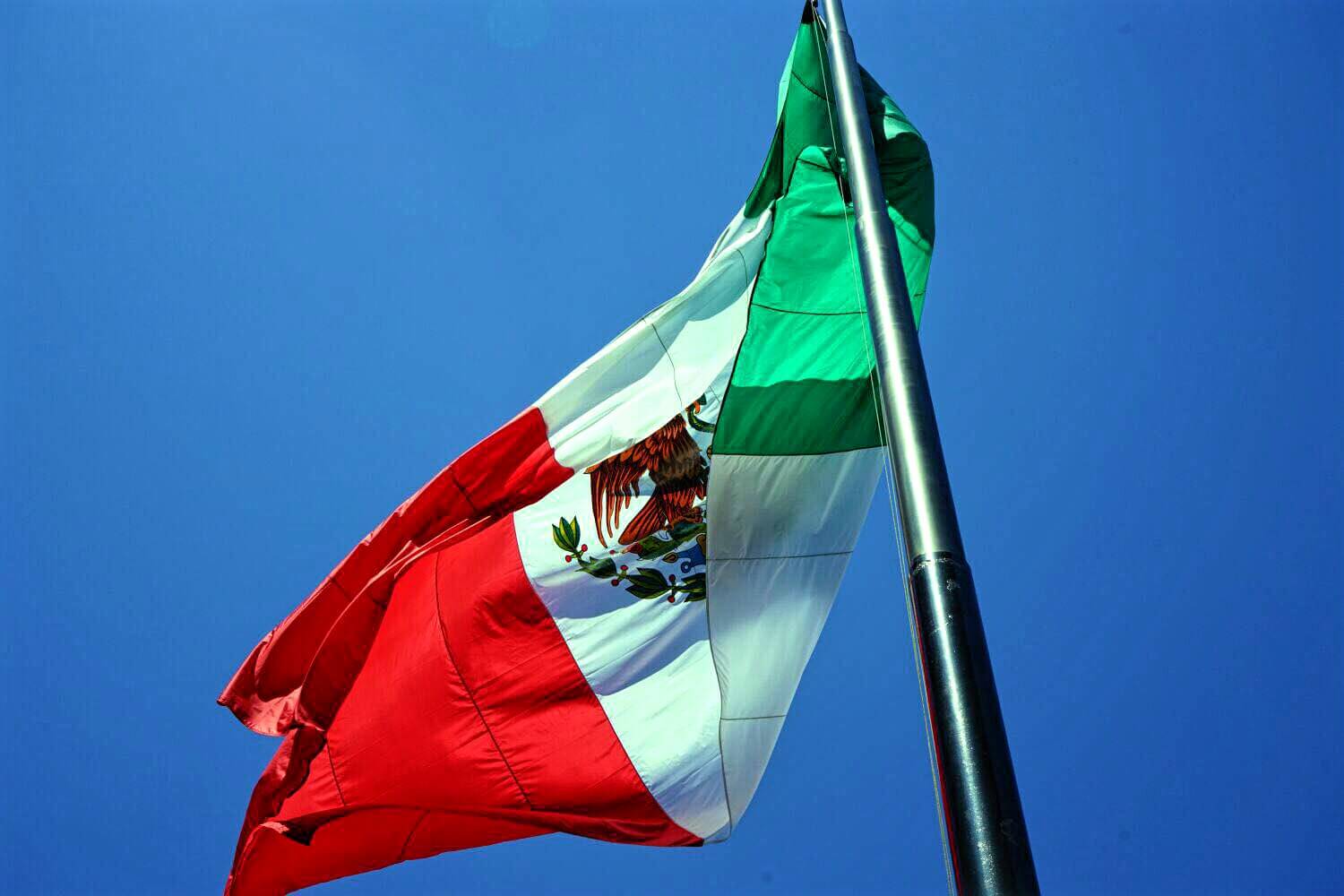 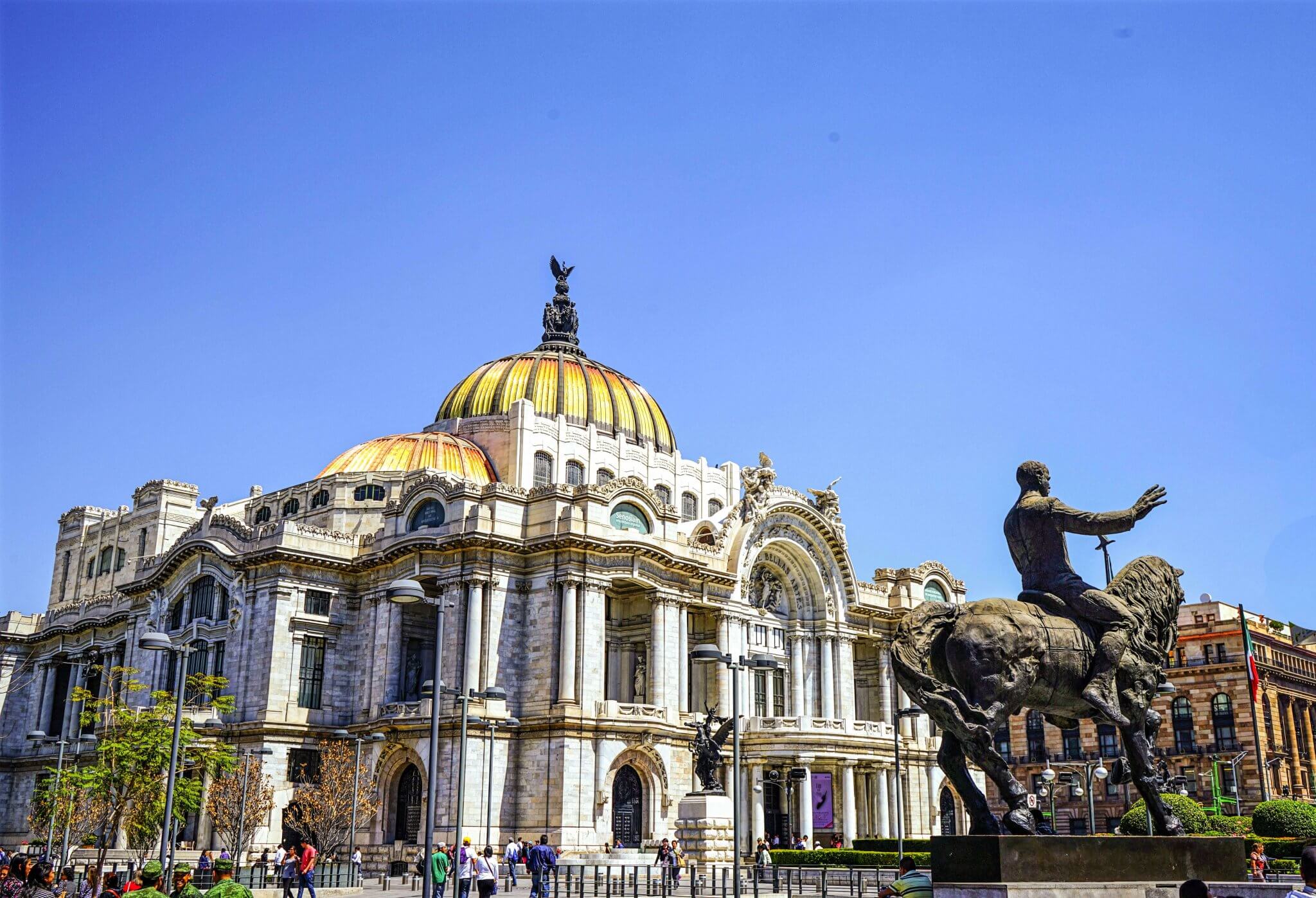 How did we get there?

Rishi and I had booked an amazing cheap flight to Cozumel for $177 CAD round trip per person, at the end of February for 7 days. We are not the type to lie on a beach doing nothing for 7 days, I wanted to see attractions and explore another Mexican tourist city, we decided to make Mexico City the main focus of our trip. Here’s is our Mexico City Review and Guide!

Knowing nothing about the megacity, I started my research. I was happy to learn that the city offered good, cheap accommodation, good, cheap food, and it was away from anything touristy. This was very different from the city centers of other Mexican cities like Cozumel and Playa del Carmen.

All that sounded great, but what about the city’s reputation for being dangerous and polluted? With a bit of research, I was happily surprised to learn that the city had done through a makeover – it was now safe and the quality was immensely improved. I was sold. 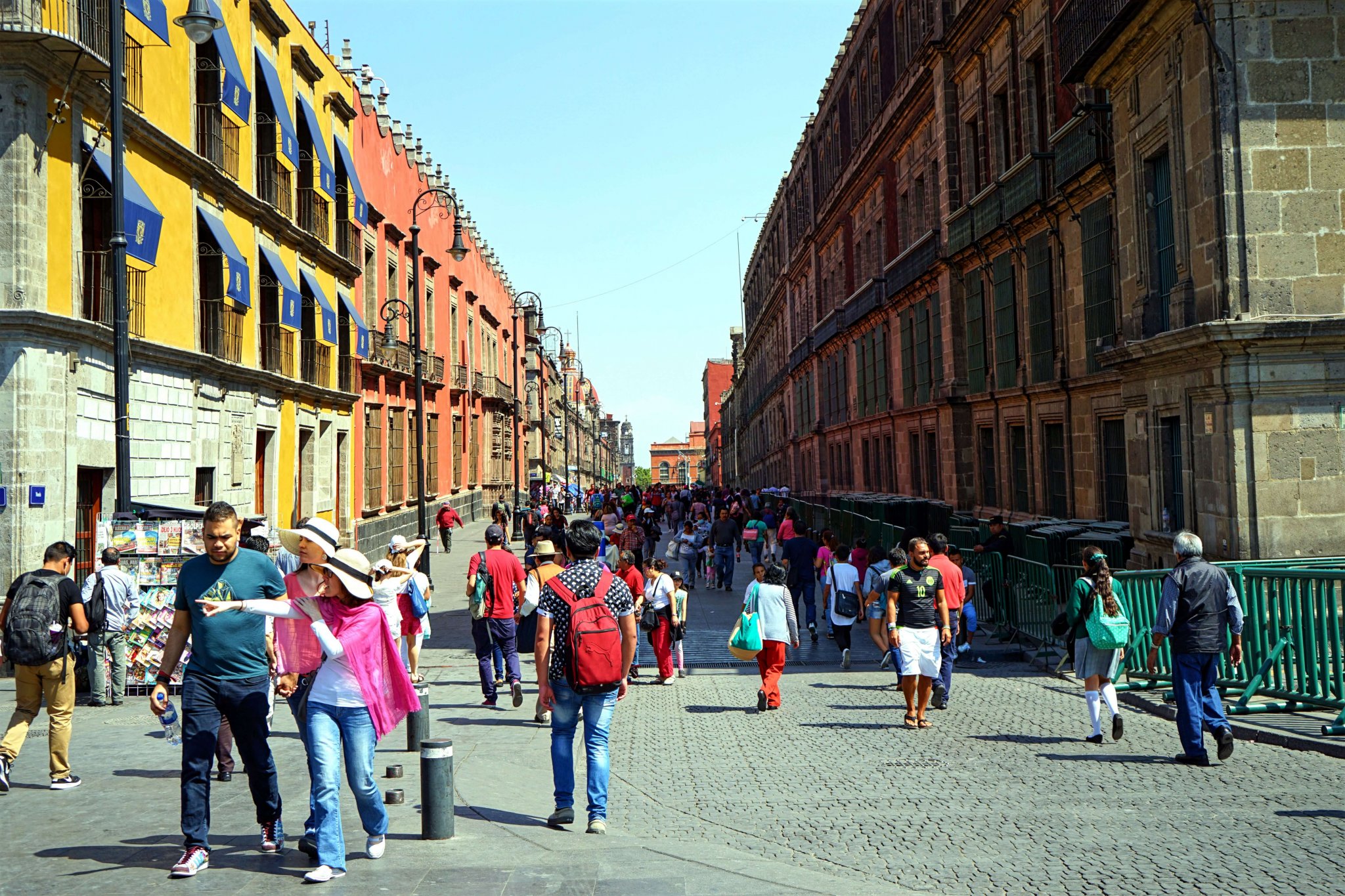 Once we landed in Cozumel, we took the ferry to Playa del Carmen, which only costs $4 CAD per person for a 35 min ride. Then we went to the ADO bus station to catch the bus which goes directly to Cancun airport. It was an hour ride for $10 CAD per person. We flew with Interjet Airlines from Cancun to Mexico City. A 2-hour flight for $70 per person.

Things to check out

As soon as we arrived, we dropped off our bags at Hotel Plaza Revolucion and headed to Av. 5 de Mayo for some lunch. I was shocked – everything I had read about the changes to the city was true. It was BEAUTIFUL. It almost has a Seville feel to it. 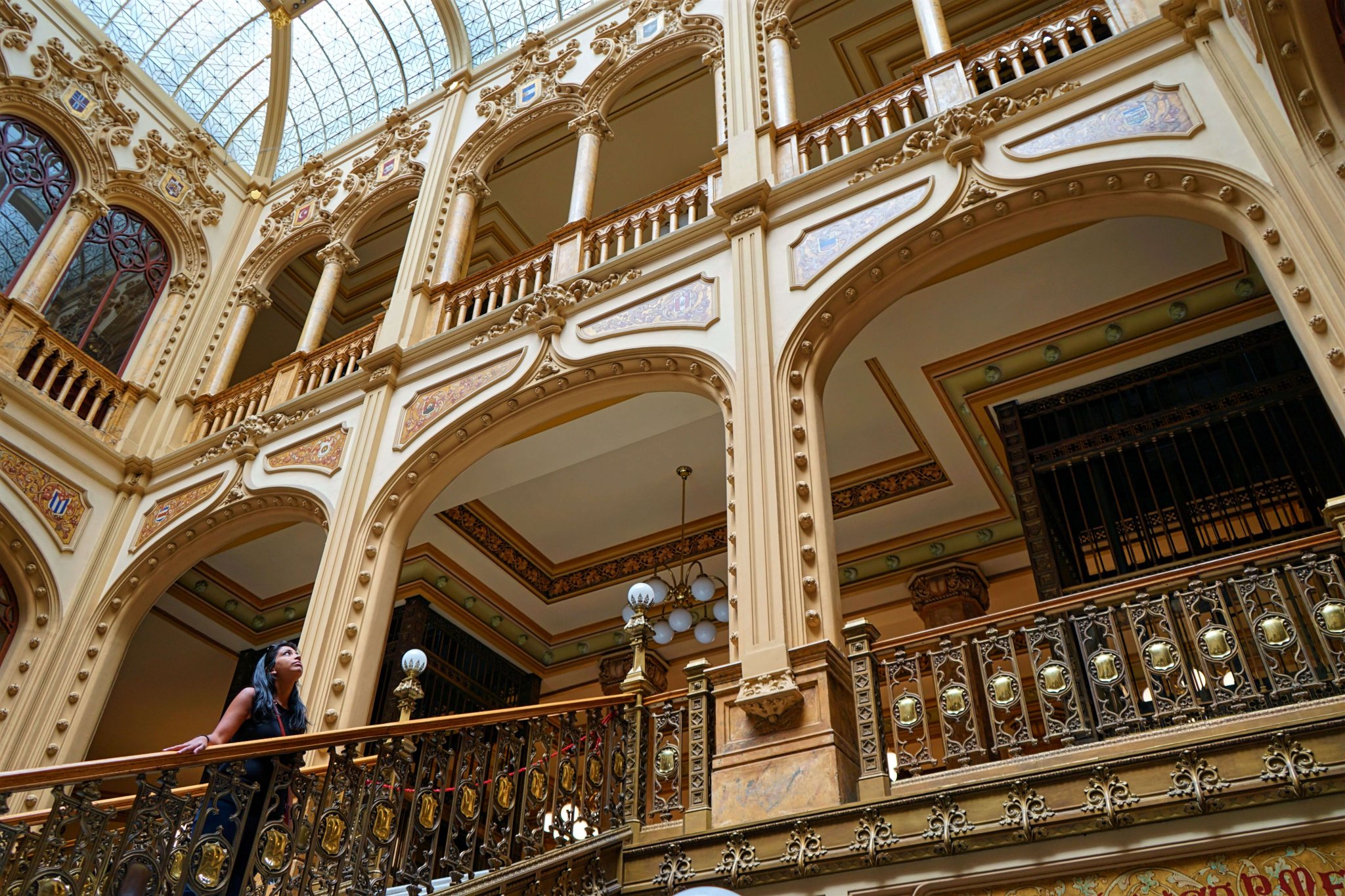 There were clean cobble stoned streets with crowds of people shopping and going about their day. We wandered aimlessly for some time, taking it all in, until we ended up at the main square at the heart of Mexico City, otherwise known as “Zocalo”. A giant Mexican flag stood waving in the middle of it. To the side, there was the beautiful Metropolitan Cathedral. It was then that I fell in love with the city. 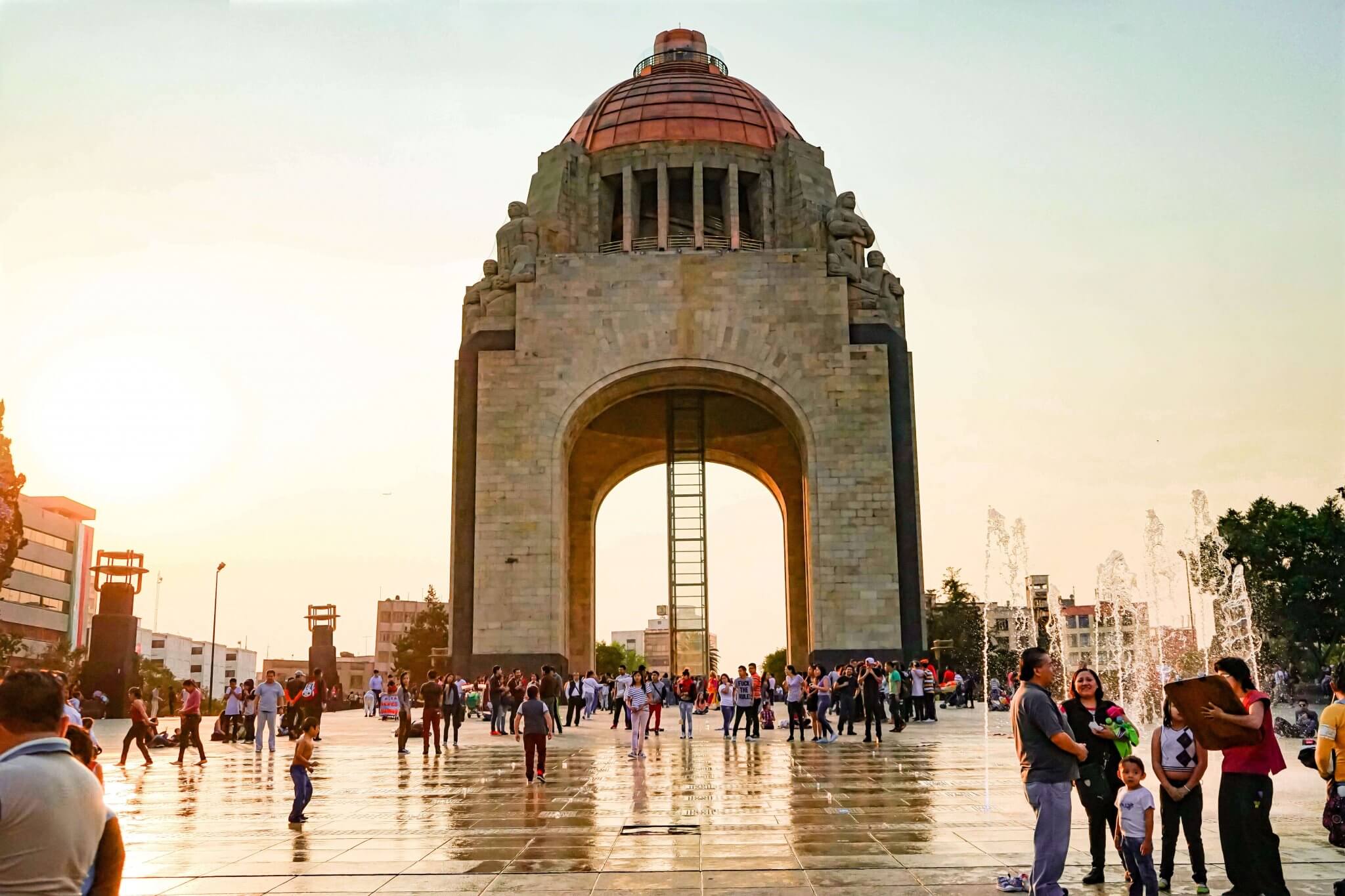 The best type of people watching was at Plaza de la Republica on a Saturday evening, during sunset. There were kids playing in the splash fountain, a high school band practicing their drums and trumpets, different families all dressed up with a girl in a princess dress taking photos for her “Quinceañera”, and hundreds of people just sitting on the sidelines enjoying the view. It was such a happy and amazing sunset.

I highly recommend seeing the Museum of Anthropology. It has a complete history of man in North America and some amazing displays. I won’t give away too much here, except to say it’s fascinating and something you need to explore for yourself! 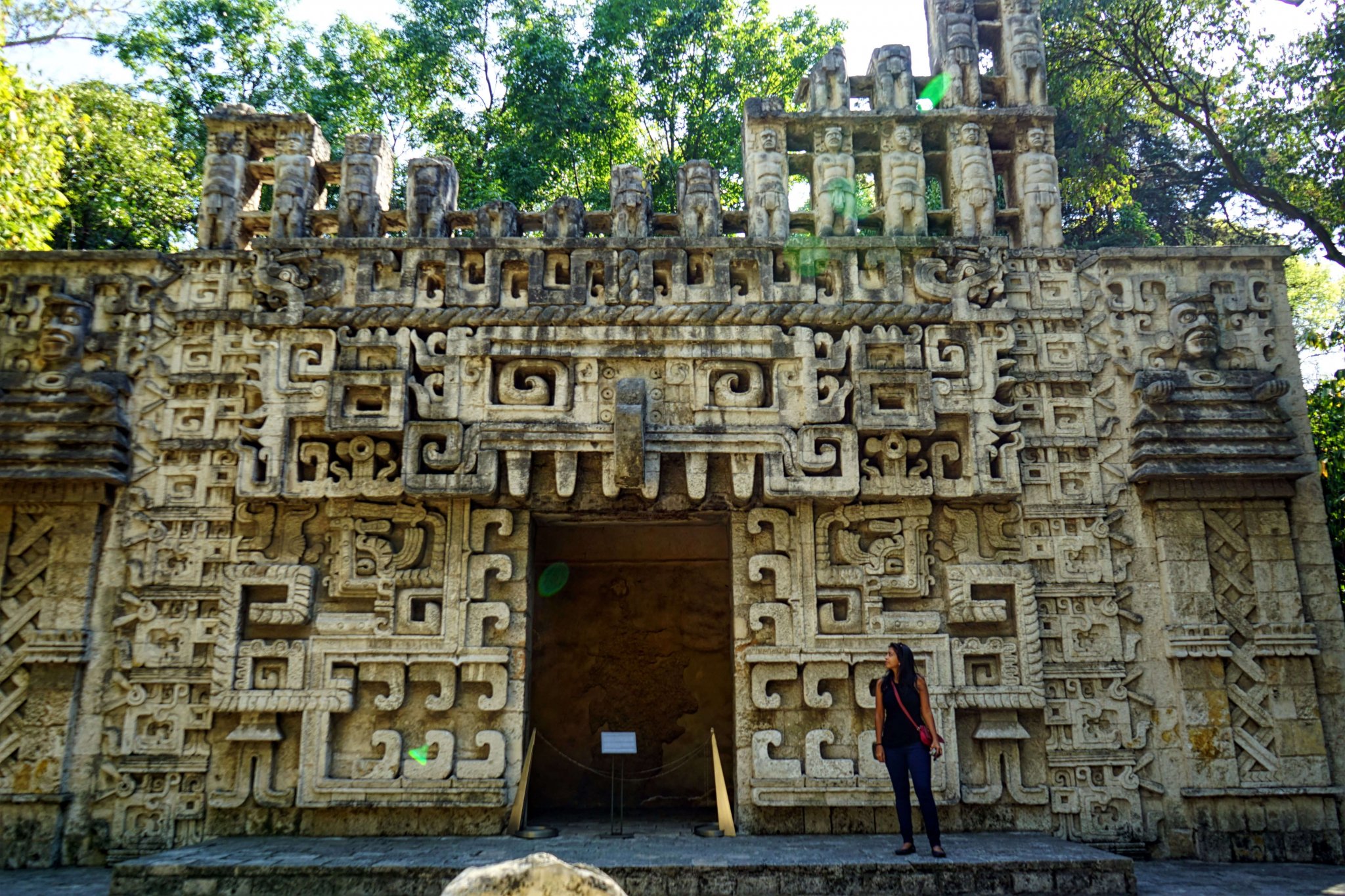 Museum of Anthropology is in Chapultepec Park which also holds Chapultepec Castle, and is only a 10 min walk from the Museum. There, you will see stunning views of the city. You can take a perfect shot of the skyline and Paseo de Reforma.

Money-saving Tip: Get there around 4:30 pm to get free admission! You get a half an hour to roam around till it closes at 5 pm.

One of the best experiences was attending a Lucha Libre match at the Arena Coliseo. You can buy tickets on Ticketmaster or right at the box office. It’s pretty small inside so you have a great view from any seats. We preferred seats on the first level since the 2nd level seats have a fence over them. It was so exciting, seeing little local children with Mexican wrestling masks screaming for their favorite wrestler. It got very loud and super fun! Bonus: As Canadians, we’re used to overpriced concessions, but that was not the case here! A beer or a bag a chips or popcorn only costs $2-3. It was a great way to spend an evening! 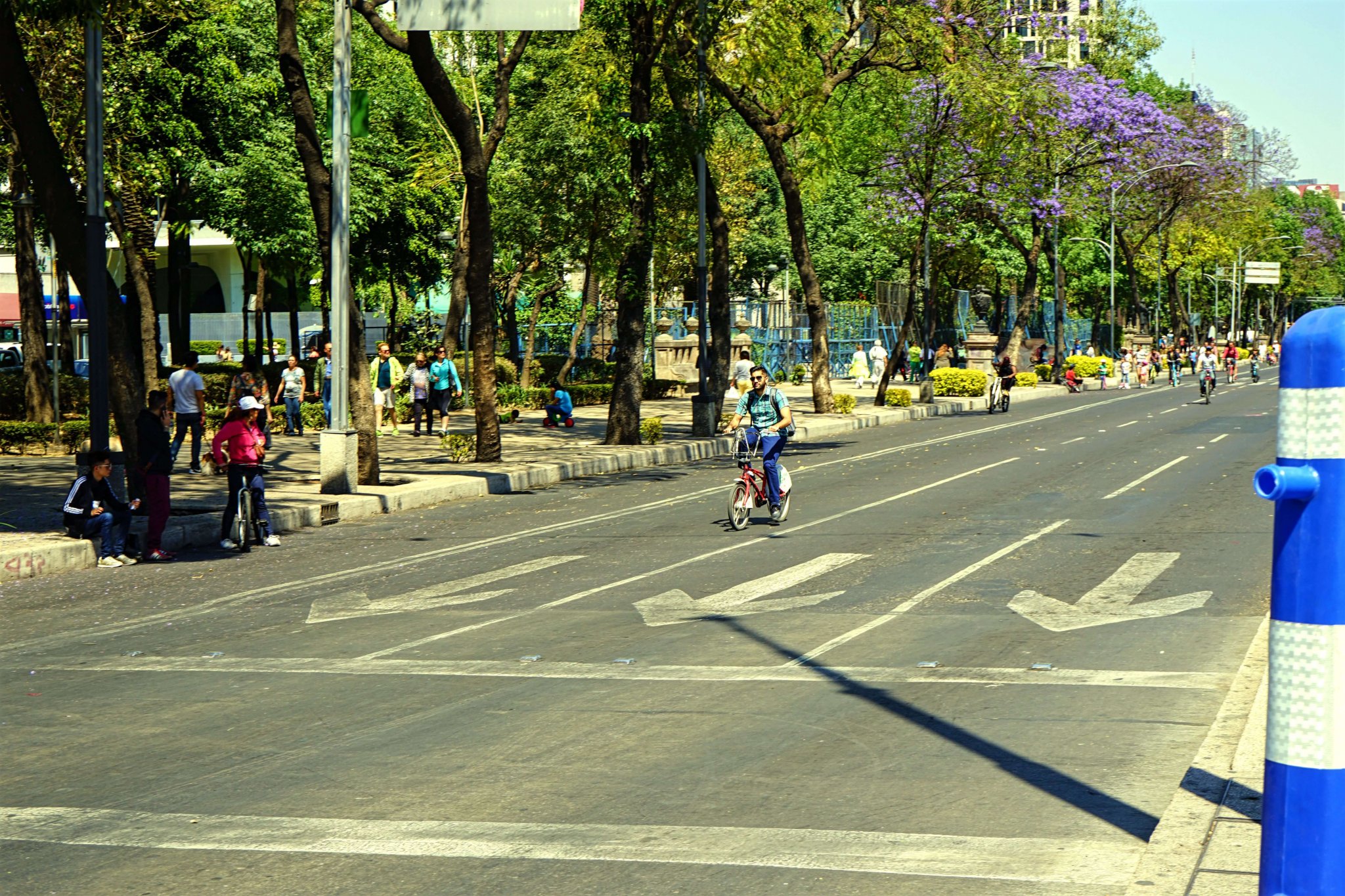 Every Sunday, the City’s most famous boulevard, Paseo de Reforma, opens up to bikers. No motor vehicles are allowed until 2 pm It was quite the experience to rent a bike from the Bici stations and ride alongside hundreds of people. It was a great way to see the city.

One of our favorite day activity was when we visited the Pyramids of Teotihuacan. It is an hour away from Mexico City and there are many tour packages you can book if you prefer it that way but it is very easy to get to. We took a super cheap Uber to the North Terminal Bus Station where we walked over to Gate 8 and bought tickets from “Autobuses Teotihuacan”. I’ll be honest, it wasn’t the most fun ride. The bus we had squeaked every time it pressed the breaks. Imagine how it sounded in traffic! We opted out of the bus ride going back to Mexico City and ordered an Uber. Almost an hour drive and only costs us $20 CAD. 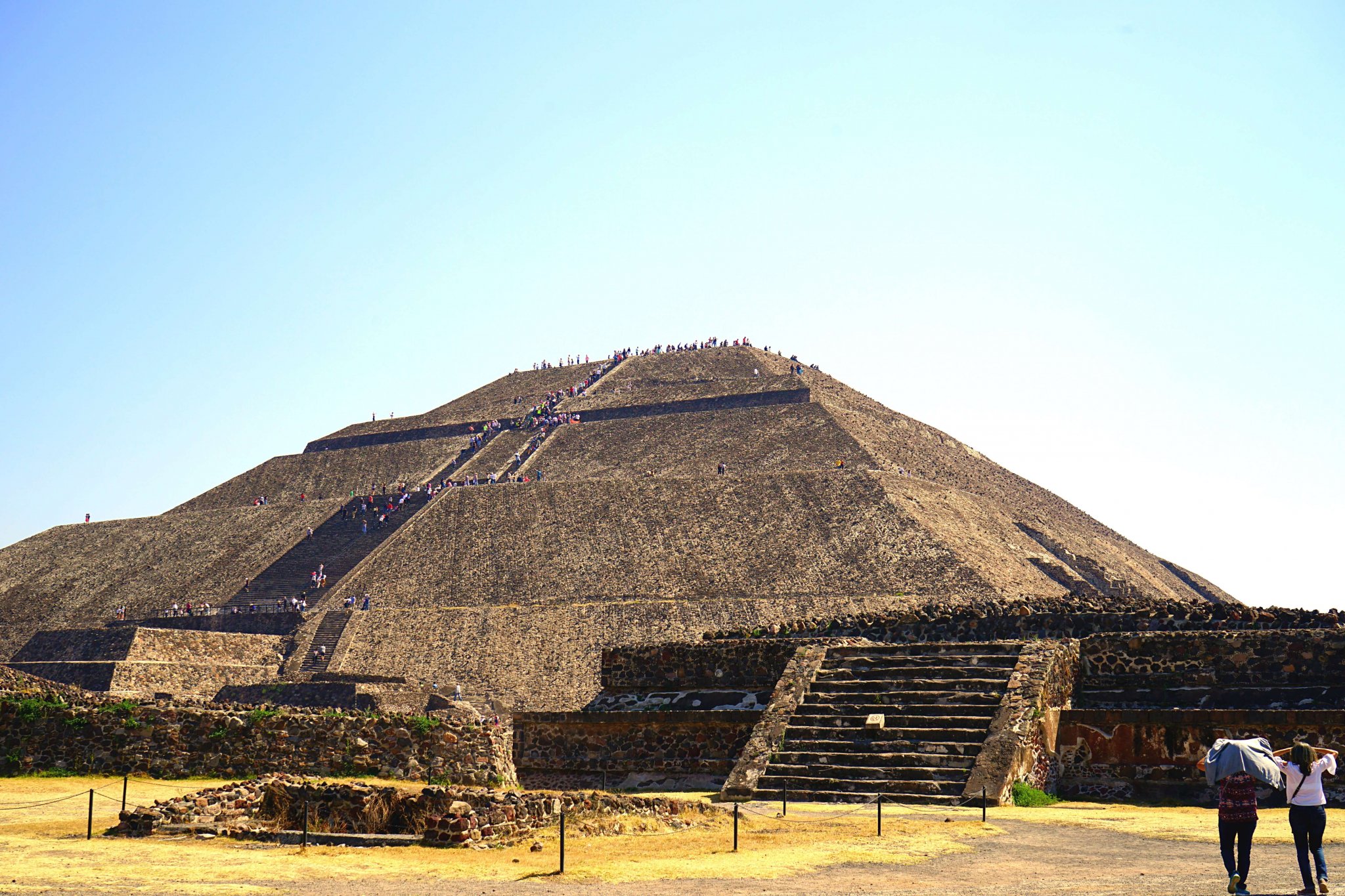 The bus drops you off right at the Pyramid Gates. There are a lot of vendors trying hard to sell you stuff. My suggestion is to ignore them. They will be all over the Pyramid grounds. It’s a lot of walking to the first Pyramid but once you get there, everything else is kind of close by. The Pyramid of the Sun is the biggest one. We took our time climbing up the steep steps, taking breaks every time we had a chance. The view up there was breathtaking. I highly recommend it. Pack a snack and sit your butt down and enjoy it up there! We then headed towards to Pyramid of the Moon and the nearby smaller pyramids. It has a great view of the Pyramid of the Sun. The wind and fresh air will definitely wake you up. 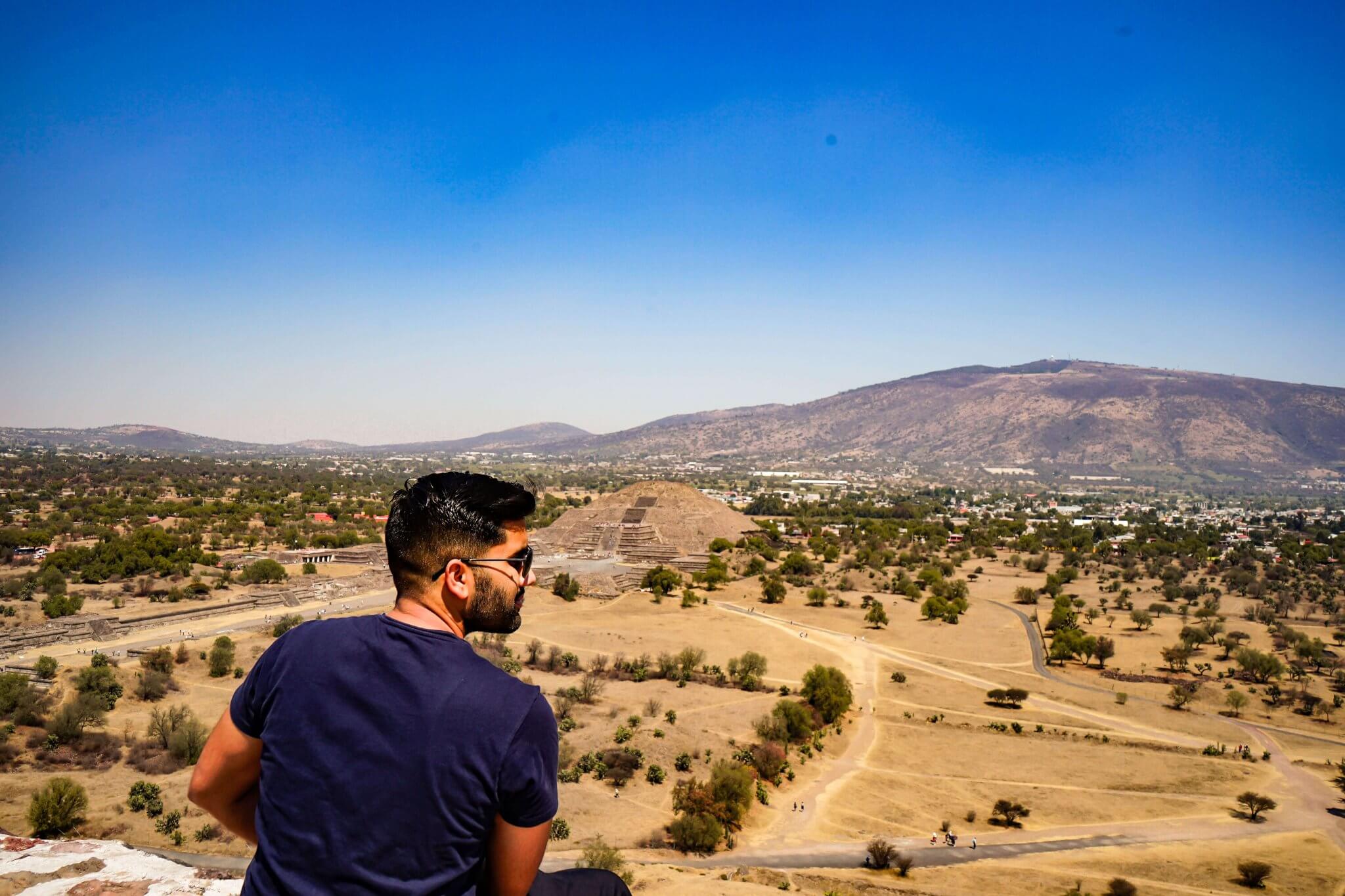 We spent about 4 hours at the Pyramids and grabbed lunch at one of the unique restaurants I have ever been in. It is called La Gruta and you are seated inside a CAVE! I highly recommend this restaurant! There are traditional performances and the food was delicious. There will be a slight wait for your table but there’s a bar where you can grab a brew and enjoy looking at the cave from the top! All-in-all, if you are in Mexico City, do not miss going to Teotihuacan! 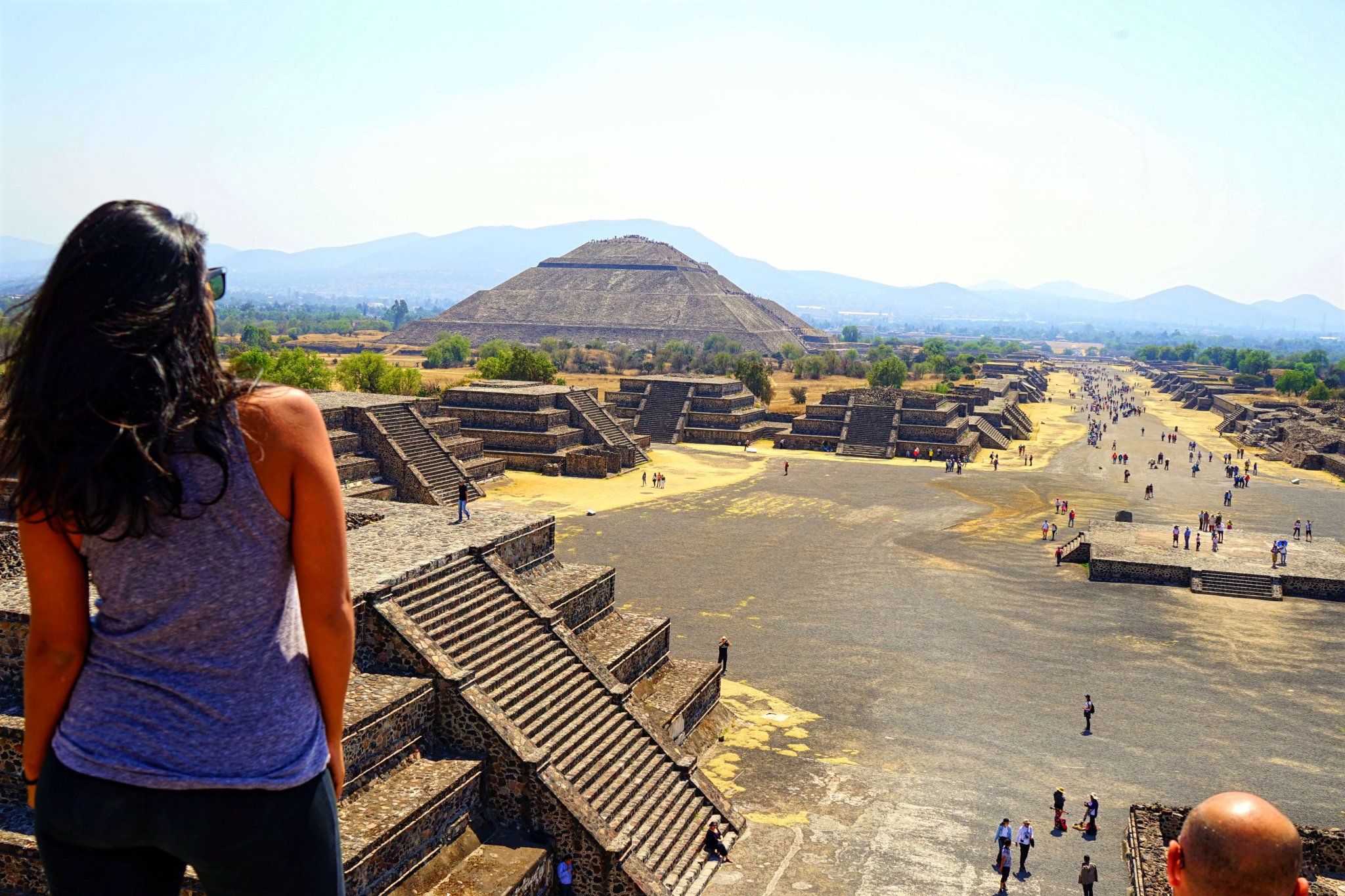 You won’t regret it!

We learned something very important on this trip: to not base our decisions solely on other people’s opinions, as there is some ignorance and prejudice out there. to So many people had told us that it was a dangerous city and that someone might kidnap or kill us. We received so many warnings. It was not the city that people told us it was going to be. We honestly felt completely safe, and we feel sad that such an amazing city has a bad reputation. The people were happy and friendly, and the culture is vibrant and unique. If Mexico City has never been on your travel list because of “things you’ve heard”, I encourage you to challenge that opinion and do your own research on the facts. You will not regret it… It is truly a beautiful city. 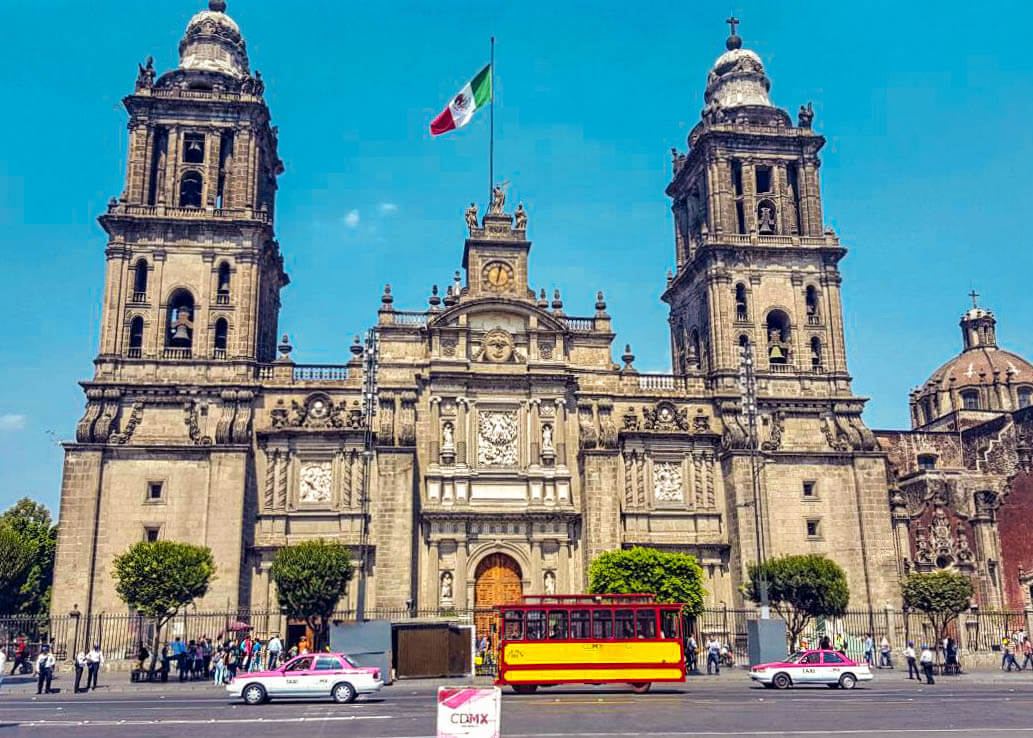